New Release Review ~ MORE TO GIVE by Terri Osburn 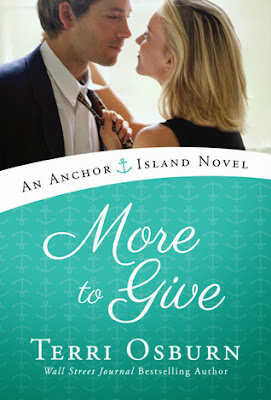 
Callie Henderson had to fight to put her tragic past behind her, but now the up-and-coming player in the hospitality industry is well on her way to happiness. She has her sights set on the lead renovation position at the Sunset Harbor Inn?an inn that just happens to be owned by Sam Edwards, the man who comforted her in her grief and gave her one night of passion before walking away.

Sam is searching for someone who can turn his quaint inn into a premier boutique hotel. He just never expected that someone to be the one woman who knows his deepest secrets. But he needs Callie, and Callie needs the job. Throw in a talking parrot with a cracker addiction, some uncooperative islanders, and enough sexual sparks to light a beachside bonfire, and they’ve got their work cut out for them.?

"More to Give" is a story of heartbreak and healing, of facing the past? and having the courage to believe in a future.

If Terri Osburn wasn’t already one of my favorite authors, More to Give solidifies her with that title.  Terri has managed to write a book full of humor (thank you, Cecil) but has also brought tender, heart-warming moments.

Callie Henderson and Sam Edwards have a very interesting past.  It’s a past that Callie has learned and grown from.  And it’s also a past that Sam appears to use as a shield to not let anyone get close.  The two meet up again when Sam runs an ad for a Project Lead, to turn his dilapidated Sunset Harbor Inn into a premier boutique hotel.  The last person Sam expects to walk into his office is Callie.  She’s different from the way he remembers her and she is now a force to be reckoned with.

More to Give is the story of two people who have become broken through no fault of their own, struggling to realize what they’re capable of.  Who they can be and what do they have to offer? I loved the push and pull Callie and Sam had going on.  I loved that each of them had the ability to be strong for the other and give them the push and encouragement they needed, when they needed it.

More to Give is the fourth and final book in the Anchor Island series, but it can be read as a standalone.  Terri did a wonderful job of bringing the previous three couples back and giving them a wonderful farewell.  As with all the books in this series, the title itself truly sums up this couple.  Callie and Sam definitely have more to give to each other than they ever imagined.

Purchase from More to Give from:
Amazon | Barnes & Noble | Goodreads