Cozy Mystery Review ~ A SPOONFUL OF MURDER by Connie Archer 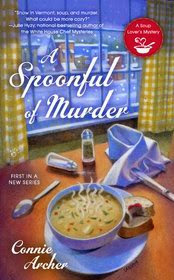 
Winter is big business in small-town Snowflake, Vermont. Tourists arrive to hit the ski slopes--and what could be more satisfying after a chilly day of carving powder than a steaming bowl of soup?

When Lucky Jamieson inherits her parents' soup shop, By the Spoonful, she realizes it's time to take stock of her life. Should she sell her parents' house or move in herself? Does she really want to run a restaurant business? And what about her grandfather Jack, who seems to be showing signs of Alzheimer's?

But her life decisions are moved to the back burner after an icy blonde tourist is found frozen to death behind the soup shop. and Lucky is bowled over when her soup chef, Sage DuBois, is led out of the kitchen by the police. As suspicion and speculations snowball, Lucky decides that the only way to save her employee and her business is to find out herself who iced the tourist--and landed her chef in the soup...

REVIEW
I will admit to reading the Soup Lover’s Mystery series out of order.  But the cool thing is that I still had no idea how events were going to play out.

Lucky Jamieson is at a crossroads in her life.  She’s in her late twenties and has spent most, if not all of her adult life in Wisconsin, where she went to college. She has pretty much just been surviving without a career goal in mind.   An only child, she has just returned to her hometown of Snowflake, Vermont after the death of her parents.  Her only relative now is her grandfather, Jack.  She’s left with her parents’ house and their café, By the Spoonful.  She’s also left with debt from her parents being overly nice and trying to keep their beloved restaurant afloat.

Just as Lucky is trying to figure out what she wants to do with the café (sell it or keep it), she has to deal with the discovery of a customer found dead behind the café and her chef being arrested for the murder.  Business is declining and customers are NOT showing up.  Lucky decides that her only course of action is to figure out who actually killed the customer and get her chef, Sage out of jail.

With a large list of suspects, Lucky has her work cut out for her.  I was completely surprised when the murderer was revealed and with the shocking end the story took.  A Spoonful of Murder is a charming story full of characters you can’t help but fall in love with.  For me, this book is what a true cozy mystery is all about.  It’s a comfort read that just invites you to relax and get cozy.