Review ~ FALLING FOR THE ENEMY by Samanthe Beck 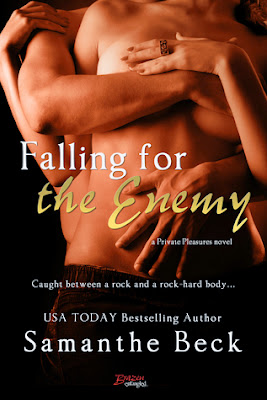 Caught between a rock and a rock-hard body…


Salon owner Virginia Boca has declared herself celibate...at least until she wins the election for mayor of Bluelick, Kentucky. No hot men. No sex. And her plan to play the good girl might have worked—if the mysterious, hard-bodied stranger she’s seen around town hadn't pulled her from the street and saved her life. The least Ginny can do is offer her savior a free haircut.

But when an innocent haircut turns into hours of wickedly hot sex, former Navy SEAL Shaun Buchanan knows his plan to keep a low profile is shot. Especially once Ginny finds out he’s the current mayor's son. With her reputation and the election on the line, Ginny seems determined to keep their nightly sexcapades a secret, but Shaun’s not willing to stay in the shadows forever…

REVIEW
Simply put, Falling for the Enemy by Samanthe Beck is a must read.  I’m happy to say that I’ve read all of Samanthe’s books and she definitely doesn't disappoint with this one.

Virginia “Ginny” Boca is a hairdresser and salon owner.  Shaun Buchanan is a career soldier.  The two first meet when Shaun saves Ginny from his idiot younger half brother, almost running her over.  With no more than a chance to say thank you to the stranger who saved her, the two part ways.

Ginny has had enough of the current politics and political leadership of Bluelick and decides to run for mayor.  She knows that to beat the current mayor, Tom Buchanan, she has to keep her nose clean.  So no partying hard and no revolving door of men.  Better yet, no men what-so-ever!  Too bad the sexy, dark, and mysterious “Wolverine”, the man who saved her, fills her thoughts and dreams.

Shaun has returned to Bluelick to figure out his next move.  He’s tired of the military life.  Shaun wants to keep a low profile.  Too bad he can’t stop thinking about one certain hairdresser, who has the ability to talk too much and yet put people at ease at the same time.

Ginny catches Shaun crossing the street and convinces him to let her give his shaggy hair and beard a cut.  What should be something innocent turns into more.  The result is the two of them christening almost every surface and seat in Ginny’s salon.  For these two, one time just isn’t enough.  With Ginny running for office, she has to keep her relationship with Shaun under wraps.  It never occurs to her to find out what Shaun’s last name is and Shaun could really care less of the politics of Bluelick.

But things change when Shaun’s last name is revealed and Ginny has to wonder if she can trust Shaun at all.  There’s more to this couple than just sex. Ginny is a really good person who truly wants the best for her community. Shaun, as with all of Samanthe’s heroes, is incredible.  He has a sense of honor that is unmatched.  When put to the test, he will always do the right thing.

Of the three books in this series so far, this is by far my favorite.  You just have to read for yourself to find out why.

Purchase Falling for the Enemy from:
Amazon | Barnes & Noble | Goodreads