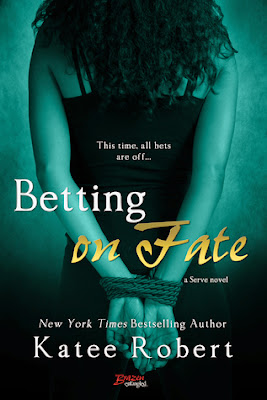 
This time, all bets are off…

Penelope Carson loves to steal clients from Will Reaver. Yet something in her business nemesis’s icy blue eyes makes Penelope…nervous. It certainly doesn’t help that the man is the living embodiment of a Norse god. A controlled, powerful Norse god. Which she really should have remembered before she made a bet with him—because losing means becoming Will’s personal submissive for a week.

There’s nothing Will would like more than to have Penelope kneeling before him in complicit submission, her fiery dark eyes inviting him in. Challenging him. But their bet takes Will and Penelope deeper than either of them have ever been. Where control is an illusion, and boundaries are pushed aside. And where hearts become the stakes in a game that neither Dominant nor submissive can win…

REVIEW
Having loved Mistaken by Fate, I couldn't wait to dive into this and see what Katee Robert had in store for Will Reaver.  The glimpses we caught of him in his twin's story (Garrett), left me tantalised for more.

“When I win, you’ll wear my collar for a week.”

Will is a Dom and Penelope Carson a switch, although more used to being dominant than submissive.  And when she loses a business bet meaning she spends 7 days as his personal sub, it's challenging to say the least.

"I’m feeling generous, pet.  I’m willing to allow you to choose the instrument.  The crop, the paddle, or the flogger?"

I liked Will and, like his brother, in the bedroom he's a master, isn't cold or detached with it and does show an attentive, caring side.  But he didn't seduce me in the way Garrett did.  I found his and Penelope's journey a little slower; don't get me wrong, they do give us sizzling action, but it took me a while to become invested them as a couple and I struggled to warm to Pen until the second half of the book.  But when she let herself go a little it became the book I had wanted earlier, plus Katee took the plunge and has done what no Brazen has ever done - thrown a ménage scene into the equation; one which worked perfectly, wasn't over the top and was written tastefully and very sexily.  If this is something you're wary about, don't let it deter you.

"Your body is mine, pet.  Mine.  And I’ll do with it what I please—and that includes sharing it with who I see fit.  Do you understand?"

Mistaken by Fate may have had the edge for me, but Betting on Fate is still a great addition to the Serve series.  Plus it was a little treat to discover a link to Katee's Match Me series.  Looking forward to seeing what lies in store for Garrett and Will's younger sister, Sara.

**Copy received courtesy of Entangled Publishing for an honest and unbiased opinion.**