Because she loves me...Terri Osburn sits down for an interview

Today I’m excited to have one of my favorite authors stop by for an interview. An Amazon and Wall Street Journal Bestselling Author, Terri writes kick-ass heroines and heroes to die for.  Say hello to Terri Osburn.

Hi, Terri.  Thank you so much for agreeing to chat with me.

Hi, Kim.  Thanks for having me back.

Okay, here’s my burning question.  What was it like for you writing the final page of More to Give.

To be honest, writing the final pages of every story is difficult for me.  I'm the odd author out who struggles to write the beginning and the ending, but loves all the stuff in the middle.  That said, this one was kind of a joy, especially the epilogue.  I got to give two really great people a beautiful happy ever after, and then I got to hop forward a bit and give all the major characters some fun new happiness.  To prevent spoilers, I'll stop there, but as bittersweet as it was writing the end of this series, it was also lots of fun.
Oh my GOSH!!!!  Yes.  Thank you very much for the epilogue.  I think I might have laughed and screamed a little bit, but the scream was because I was excited.

You wrote Cowboys for Christmas with Kim Law and Liz Talley.  I really like that book and all the characters in it.  Is there a chance that you guys are going to team up again?

There definitely is.  We're already working on another Holly Hills collection we hope to have out this fall, with a county fair theme.  Readers will catch glimpses of their favorites from the Christmas anthology, but will also meet new cowboys to love, and get to follow along as their perfect heroines lasso them in.
That’s awesome.  I was hoping there were going to be more books. I’m looking forward to it.

How do you write your books?  Do you start in the middle or end or do you write down scenes and then try to figure out how to put them all together?

I am a very linear writer, mean I write the book from start to finish as it unfolds.  Though scenes from later in the book almost always dance around in my head, I can't write those scenes until I get to them.  So I take notes, mostly of the dialog I hear in my head, and keep going.  I typically have the next 3-5 scenes planned, and know where I'm going, but everything is flexible and often times the scenes I think will be including when I get started, never actually show up in the book.
For the last couple books, I've been on tight deadlines and simply didn't have the luxury of lounging about plotting and outlining.  Which means I've been flying by the seat of my pants to write these stories.  Something that is both terrifying and exhilarating.
Interesting.  You’ve written 5 books now.  Who is your favorite heroine and why?  Who is your favorite hero and why?  I know a really really tough question.

So tough! I've heard authors say time and time again that their favorites are the ones they're writing now, and find that to be true.  But there is a special place in my heart for Sid Navarro, the heroine of UP TO THE CHALLENGE.  As soon as the mouthy boat mechanic stepped onto the page in MEANT TO BE, I knew she was going to be a handful.  She's brash and profane but with a mushy center and a heart of gold.  The kind of character readers either love or hate, and I'm so happy that most seem to love her as much as I do.
As for favorite hero, that's really hard.  If I really had to choose from the books that are out, I'd have to say Lucas Dempsey, also from UP TO THE CHALLENGE.  He's smart, but has his dorky moments.  A true stand-up guy with charm and charisma and a great sense of humor.  He's also quite hot, which all good heroes are, but there's something extra about Lucas that makes my toes curl just a little more than the others.
I have to add a caveat here and say that Spencer Boyd, the hero of HIS FIRST AND LAST, which is the first of my Ardent Springs series releasing in April, gives Lucas a serious run for his money.  Southern charm and a total smart-ass, Spencer is definitely another toe-curler.
I love Sid!  She’s the anti-girl, with the biggest heart of gold.  And you’re right, Lucas is a really great guy.  Those two really compliment each other.

You’ve been through some trials in your life.  I don’t know if you know this, but I see you as a strong person who has survived.  Did you purposely make your heroines strong characters with some of your characteristics?

Thank you for the compliment.  I have been through some trials and tribulations, as most people have.  Without a doubt, I write strong heroines on purpose.  Those are the women who speak to me.  And they don't always begin the story at their strongest point, but definite gain strength as the book goes along.
As for adding my own characteristics, I do not do that on purpose, but I also don't know how to not do that.  And I'm guessing any writer would say the same.  I have a writing buddy who loves to point out the similarities between myself and my heroines.  I do curse like a sailor (Sid), I do want to make people happy (Beth), I have a touch of cynicism (Will – and not my favorite feature), and I'm a business woman at heart (Callie).  But also, in my mind, each of these characters is a very unique, complicated woman unto herself, completely separate from me.  I think that's where the balance comes in.  I'm not attempting to write my own story over and over again.  I'm writing these characters' stories, and helping them reach a stronger, happier point in life, that just happens to include falling in love and living happily ever after.
I love all of your characteristics.  I really think I want Sid to be my bestfriend.

So you know that I author stalk you.  Wait.  Maybe you didn’t know that.  Ooops... Anyway, I discovered you long before Meant to Be came out.  In fact, you didn’t even have book covers on your website.  Are you currently working on anything at the moment?

Stalk away! (Though there's no need to hide in the shadows or the bushes. Come in, sit down, let's have some tea.) I am indeed working on something at the moment.  The first book in the Ardent Springs Series (HIS FIRST AND LAST mentioned above) releases in April, and I am currently working on the second book in that series.  We're also cooking up more cowboys, as mentioned, and there is another series dancing around in my brain demanding attention.  It's very different for me, and I'm not sure I could juggle two series at one time, so regardless of how it all shakes out, it's safe to say I have enough characters jabbering in this head of mine to keep me writing for several years to come.

Awesome! (In my Lego voice.)
Tell me about your Ardent Springs Series.  What can we expect from it?

I'm so glad you asked! Ardent Springs is a little hole-in-the-wall town northwest of Nashville, TN, where little changes except maybe the population as kids grow up and move away.  It's a typical southern town in that everyone knows everyone's business, memories are long, gossip is brisk, and judging others is the local pastime.
In book one, HIS FIRST AND LAST, Lorelei Pratchett had a rough childhood, being the daughter of a disgraced mother and then losing her at a young age. The town never gave her a break, and as a result, Lorelei became a rebellious teenager who spent hours in the local movie theater losing herself in any world but her own.  When the book starts, Lorelei returns from Hollywood a failed actress, a bit damaged, and completely lost.  It's up to her high school sweetheart, Spencer Boyd, to help her find her way, and to show her that the town she ran from isn't all that bad after all.
Sounds good.  I’m looking forward to reading it.  Thank you so much Terri.

I love these questions.  Thanks for having me.

His First and Last is also available for pre-order 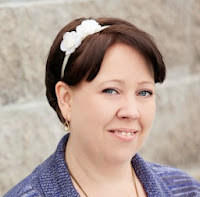 Terri makes her home along the coast of Virginia with an eye-rolling teenager, two fat tabbies, and a hyper yorkiepoo. In her nefarious past she worked in customer service, fund-raising, catering, and was even a train conductor. (In the mall. Not as impressive as it sounds.) She was also a Country radio disc jockey for eight years, which makes her one of those rarest of author creatures – an extrovert.

In 2012, she was named a finalist in the Romance Writers of America Golden Heart contest. Shortly after she signed with an agent and moved into publication.  Her debut novel MEANT TO BE launched from Montlake Romance in May 2013, with the follow up, UP TO THE CHALLENGE, in October 2013.  The third book, HOME TO STAY was released in May 2014.  The final book in the series, MORE TO GIVE was released in November 2014.