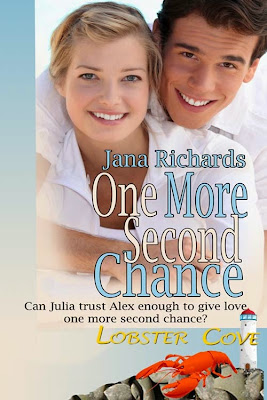 Dr. Alex Campbell has an agenda—finish his contract to provide medical services in Maine, pay off his medical school debt, and head back to his real life in San Diego. But when he meets Julia, all his carefully laid plans are put in jeopardy.

Julia Stewart, Lobster Cove’s high school principal, swears she’ll never let another man drag her away from the home she loves. Her aging parents need her, and the Cove is where she wants to raise her daughter. When her mother’s illness brings her and the big city doctor closer together, panic sets in. Her marriage taught her men don’t stay.


Can she put aside the heartaches of the past and trust Alex enough to accept the love he’s offering? Or will her fear of abandonment mean she’ll send him away forever?

He stepped off the stage as inconspicuously as he could, and made his way to the table manned by Jill from the diner and several other volunteers who were collecting the proceeds of the auction. Writing a check for his purchase, and adding an extra hundred dollars to make an even thousand, he handed it to Jill.
“Thank you very much for your contribution, Dr. Campbell,” she said with a smile.
“Please, call me Alex. I spend so much time in your diner I feel we should be on a first-name basis.”
“All right. Alex it is.” She wrote a receipt and handed it to him. “You made a very fine purchase.”
“Yeah.”
He couldn’t help turning his attention back to the stage. Edie and Aaron had stepped down, leaving Julia alone to handle the master of ceremonies duties. Her voice sounded shaky, as if she was still struggling with her emotions.
“I invite you to take a look at the silent auction prizes we’ve assembled. There’s something there for everyone. We’ll be picking the winners in an hour, so there’s still time to get your tickets. And the ladies at the bake sale booth tell me they still have some items for sale. Everything has to go, so please go see them. I’m going to turn over the mic to our deejay now. Let’s get this party started!”
Alex closed his eyes. He had to get out of here. He couldn’t listen to Julia’s voice anymore, couldn’t watch her, and still pretend there wasn’t something between them. He couldn’t hide his feelings any longer.
He was in love with her.
“Dr. Campbell? Alex? Are you okay?”
Jill stared at him with a concerned look on her face.
She probably thought he was crazy. Maybe he was. He couldn’t be in love with Julia. He was leaving in six months.
He left the gymnasium as quickly as he could manage, but he couldn’t outrun his thoughts. He was in serious trouble. He was in love with a woman he couldn’t have. A woman who didn’t want him.

When Jana Richards read her first romance novel, she immediately knew two things: she had to commit the stories running through her head to paper, and they had to end with a happily ever after. She also knew she’d found what she was meant to do. Since then she’s never met a romance genre she didn’t like. She writes contemporary romance, romantic suspense, and historical romance set in World War Two, in lengths ranging from short story to full length novel. Just for fun, she throws in generous helpings of humor, and the occasional dash of the paranormal. Her paranormal romantic suspense “Seeing Things” was a 2008 EPPIE finalist.
In her life away from writing, Jana is an accountant/admin assistant, a mother to two grown daughters, and a wife to her husband Warren. She enjoys golf, yoga, movies, concerts, travel and reading, not necessarily in that order. She and her husband live in Winnipeg, Canada with their Pug/Terrier cross Lou and several unnamed goldfish. She loves to hear from readers and can be reached through her website at www.janarichards.com