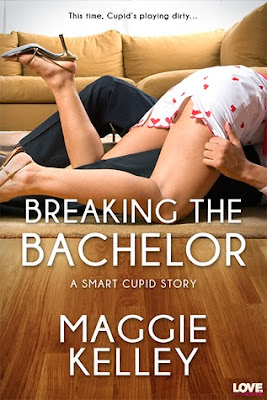 Goaded by her competition, matchmaker Jane Wright makes a very public bet that she can find the “perfect” match for Manhattan's hottest confirmed bachelor—sexy-as-sin bartender Charlie Goodman. Unfortunately, Charlie is also Jane's ex-lover, a man she broke up with on a cocktail napkin. With her company on the line, Jane has no choice but to convince the man of her most impractical dreams to dive back into the dating pool.

Charlie doesn't want to see Jane's business fail. He just wants a little revenge. Determined to prove to Jane that chemistry always beats compatibility algorithms, he plans to drive her crazy with desire...then walk away. And his plan is working. A little too well, actually. Because even as Jane scrambles to calculate Charlie's best match, the heat building between combusts. But Charlie's been so busy outsmarting Cupid that he hasn't noticed he's the naughty cherub's next target...

REVIEW
Six months ago, after a lifetime of friendship and two fun and amazing sex-packed weeks in the Caymans, Jane Wright broke up with Charlie Goodman.  This wasn’t just your normal argument and we’re done break up. No. No.  Jane broke up with Charlie on a cocktail napkin.  As a reader, I can deal with that.  Not cool, but I can get over it.

Jane’s competitive nature gets the best of her. On national tv, she says that her company’s logic based algorithm dating app can find any New Yorker the perfect match in five days.  She is so sure of this that she bets her company.

Jane has to match New York’s hottest mixologist and confirmed bachelor Charlie Goodman.  Yep, the guy she broke up with and hasn’t seen nor spoken to in six months.  At this point, you would think Jane would be all apologetic and begging Charlie to forgive her.  But no!  Jane has the freaking audacity to barge into Charlie’s apartment and demand that he go on five dates.  (Yeah. Not feeling her right now.)

There aren’t enough words to explain how much I loved Charlie.  He’s smart, playful, and is really a romantic.  There’s so much more to him than what he allows certain people to see.  He doesn’t have a picture perfect past, but he’s dealing with it.

Jane has some serious issues when it comes to love, not that she has ever tried it herself.  She thinks that a couple only needs to have the same likes/dislikes and be compatible.  Passion should not factor into love because passion dies and can’t be trusted.  Charlie thinks passion is the basis for love.

Charlie agrees to allow Jane to set him up.  Jane just doesn’t know that Charlie plans to date on his terms and even throw in a few additional dates Janes doesn’t know about.

When Jane is being the Jane from six months ago with Charlie, she’s good. Together they’re fun and playful and combustible.  They’re simply great.

Breaking the Bachelor has great secondary characters who need their own story.  Putting aside my initial feelings for Jane, the book is funny and tells the story of a wonderful romance.  I’m looking forward to more books from Maggie Kelly and more books from this series.