Review ~ THE SALVATION OF VENGEANCE (Wanted Men, #2) by Nancy Haviland 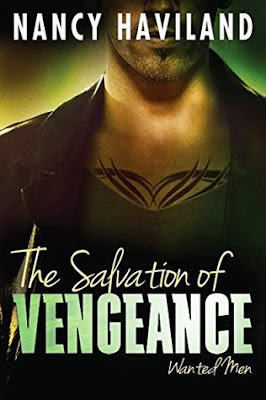 
Only something as important as her best friend’s wedding to mob boss Gabriel Moretti could allow Nika Paynne a reprieve from captivity. Her abusive husband has kept her under his thumb with footage of her beloved brother, Caleb, killing another man. But the respite from her violent life isn’t the only draw. Vincente Romani—Gabriel’s deadliest guardian—will be one of the best men at the wedding, and Nika has lingering thoughts about the fascinating mobster…covetous thoughts that may put her life in danger.

With the heartbreak he’s suffered and the brutality he effortlessly delivers, Vincente knows he’s the last person who can offer Nika a happily-ever-after. But his vow remains. He will do everything in his power to free his redhead from her violent prison—even if that means losing her forever.

In the second thrilling and passionate Wanted Men book, a dangerous line is drawn between loyalty to the mob and loyalty to one’s heart.

REVIEW
The Salvation of Vengeance was one of the best books that I have read in the past year.  It was raw, violent, disturbing, suspenseful, and just plain fun. Granted, I really love books about vengeance.  I like to see bad people pay for their sins.  It’s even better when they are so arrogant that they they don’t even see it coming.  There aren’t any angels in this book.  Everyone has a dark side. Some of them are darker than others.  The physical and mental pain that some of the characters suffer is a testament to the inner strength that we all must have in order to survive the worst case scenarios this world may bring.

The Salvation of Vengeance is the second book in the Wanted Men series. Although you don’t have to read the first book, A Love of Vengeance, in order to enjoy this one, I’m sure that you would gain more pleasure and insight into all of the key players if you did.  Nika Paynne has been a prisoner in her marriage for over a year in order to protect her brother, Caleb.  Things come to a head when her and her husband go to New York to attend her best friend Eva’s wedding.  Eva just so happens to be marrying an Italian Mob boss.  Nika also has been lusting after Vincente Romani, the Underboss of Eva’s future husband, Gabriel.  Vincente is nicknamed “Reaper” and he more than lives up to his name.  He is also equally attracted to Nika but doesn’t think he deserves such an angelic woman.  When Vincente learns that Nika has been brutally beaten by her psycho husband, he makes a vow to kill him but first he has to find him.  While Kevin is on the run, he morphs into a serial killer and the book takes an even darker turn.  It was a thrilling ride.  I’d tell you more of what happens but then I’d have to kill you.

If mobsters, guns, and scorching sexual attraction is your thing, this book will not disappoint.  I am looking forward to the next book in the series.

Purchase The Salvation of Vengeance from:
Amazon | Barnes & Noble | Goodreads