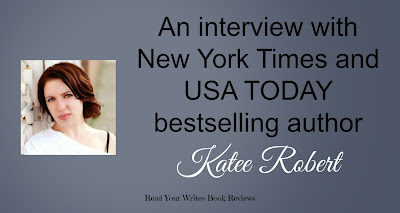 Nicola chats with one of her favorite Entangled Brazen authors, Katee Robert.

Hi, Katee.  Thank you for joining us today.
Thank you so much for having me!

Of the three Reaver siblings (for those of you who have yet to be acquainted, identical twins Garrett and Will and their younger sister Sara), who proved the most challenging to write?

Will was actually the one who gave me fits. I knew he was the Ice King and that he carried the damage of their mother leaving in a very particular way, but getting through that barrier and digging into the nitty gritty was difficult at points. He kept surprising me, so it was constantly a challenge.

...and who was your favourite character from the series? (Between us, I adored Garrett.)

Oh man! It’s like choosing your favorite kid. Though, just between us friends, Garrett will always hold a special place in my heart. He’s just so willing to dive in…not to mention the dirty talking. Good lord, the man has a mouth on him!

Wrong Bed, Right Guy was the first of the Brazen books to grace my Kindle, placed you firmly on my radar and has remained one of my favourites (Gabe is such a sweetheart). Of the books/series you have written, is there one special to you?

Thank you! Gabe remains one of my favorite heroes. He was such a fun balance of Alpha male and a man who was totally in over his head for his woman. I think my Out of Uniform series is one of my favorites overall, though. The whole series is so full of shenanigans and sexy good times, that it was probably my favorite to write to date.

What can readers look forward to this year? Please say more from the Out of Uniform series.

Yep! The second book, In Bed With His Best Friend (Drew and Avery, YAY!) will be out this spring, and the third will be out in the fall. There’s also one last novella coming toward the end of the year. So lots and lots of Out of Uniform!

I also have a new series starting in June that is sort of a departure for me. It’s centered around three Irish crime families in Boston, and one family in particular. The first book is a marriage of convenience one, which was SO much fun to play with on the darker landscape (but still so damn sexy)!
~QUICKFIRE QUESTIONS~

Beard all the way!

Thanks for taking the time to answer some questions for us!

Thank you so much for having me! 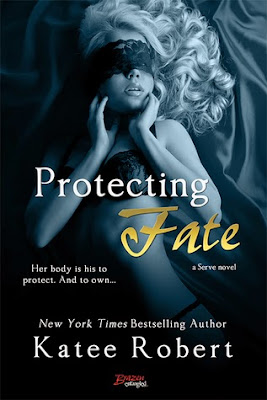 He’ll keep her safe…but who will protect her from him?

Fixer Sara Reaver is in serious trouble. She’s stepped on the wrong toes, and now her uncle is sending her out of the city in an effort to keep her safe—and he’s assigning her a glorified babysitter. The last person she expects to show up is the gorgeous Z, or for him to tempt her and then reject her in the space of a single night. Twice. Now she’s out to prove to him just how good they’d fit up together in every way imaginable.
Mercenary Z Loreto hates protection jobs, but he’s willing to make an exception for his best friend’s little sister. The only problem is she calls up things he’s been doing his damnedest to keep under wraps for the last seven years. But when she pushes him too far, it all comes rushing to the fore, and the fact she’s willing to submit to his every desire only makes the loss of control sweeter.
Sara and Z have a boatload of issues between them, but they’re sure they can make things work if they take it one day at a time… Right up until things spiral beyond their control. Now Z’s playing for keeps in a big way, and Sara’s got to decide if a chance at true happiness is worth the risk of repeating history.
~ See where it all began with Tessa Bailey's Owned by Fate and Katee’s most recent installment, Betting on Fate. ~ 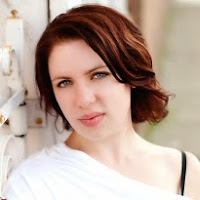