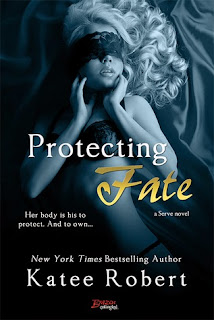 
He’ll keep her safe…but who will protect her from him?

Fixer Sara Reaver is in serious trouble. She’s stepped on the wrong toes, and now her uncle is sending her out of the city in an effort to keep her safe—and he’s assigning her a glorified babysitter. The last person she expects to show up is the gorgeous Z, or for him to tempt her and then reject her in the space of a single night. Twice. Now she’s out to prove to him just how good they’d fit up together in every way imaginable.
Mercenary Z Loreto hates protection jobs, but he’s willing to make an exception for his best friend’s little sister. The only problem is she calls up things he’s been doing his damnedest to keep under wraps for the last seven years. But when she pushes him too far, it all comes rushing to the fore, and the fact she’s willing to submit to his every desire only makes the loss of control sweeter.
Sara and Z have a boatload of issues between them, but they’re sure they can make things work if they take it one day at a time… Right up until things spiral beyond their control. Now Z’s playing for keeps in a big way, and Sara’s got to decide if a chance at true happiness is worth the risk of repeating history.

REVIEW
There's a reason I never hesitate to read Katee Robert's books; I know I'm highly unlikely to be left disappointed.  Protecting Fate is another great addition to the Serve series.  We've been well acquainted with the Reaver men, identical twins Garrett and Will, and now it's their younger sister Sara's turn, and from the glimpses we've had of her in Mistaken by Fate and Betting on Fate, it was going to take a patient, assertive guy to take on this independent, confident lady.

“I want to see how closely you can guard my body.”

When Sara upsets some folk, her uncle sends her out of New York City for her own protection.  She's not happy, she's vocal about it and the guy at the end of her irritation is Garrett's buddy and colleague, Z Loreto; the guy drafted in to protect her.  She unleashes feelings he's kept buried for years and she's persistent.  Question is, can she can break through Z's exterior? Or rather, can he break through hers...

“You will not speak unless I give permission.  You will also not come without my say so.  Disobey and you will be punished.”

Whilst in keeping with the previous books in that we have an attentive Dom who isn't detached or cold, Z was less dominant than Garrett and Will and feelings played more of a part earlier on which suited this reader just fine.  Sara is familiar to the D/s scene, she's feisty and confident enough to go for what she wants but she also has a vulnerability about her.  As does Z, and this brought the softer moments to the story.  I liked Sara's sass and confidence and liked her and Z together; with a sexy heated yet natural chemistry, they're a couple you can't not want to work out.

“Touch yourself when you think about me tonight.”

If I'm honest, it didn't hold any real surprises and I must confess I would've liked a little more action with relation to the protection side of the story, but this is minor because Katee Robert has brought her readers another sexy instalment to the series and I have no doubt Sara and Z will prove a popular couple.  And whilst it can easily be read as a standalone, I highly recommend reading Garrett and Will's stories too.

**Copy received courtesy of Entangled Publishing for an honest and unbiased opinion.**

You can also read Nicola’s interview with Katee here.  They’re talking about the Serve series and other books.