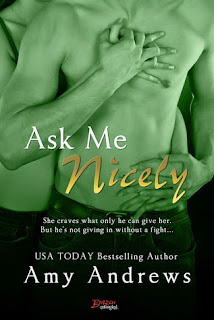 
She craves what only he can give her. But he's not giving in without a fight...
Veterinarian Sal Kennedy's lost her mojo and is desperate to get it back. In fact, as the anniversary of the tragedy that destroyed her life looms large, she'll do anything to erase the painful memories, including overdoing the tequila and making a pass at the most annoyingly inappropriate man on the planet. Fellow veterinarian Doyle Jackson is her flatmate and her employee and therefore strictly off-limits.
Unfortunately, Doyle knows how to bring the goods and make her mojo sit up and beg.

Doyle is only too happy to oblige Sal in her hour of need, but then she demands more, and she's perfectly happy playing dirty to get it. He wants more, too—more than just sex, that is, and it's something Sal's not willing to give. But Doyle is in this for the long haul now, and he's prepared to fight even dirtier to get what he wants. Even if that means they both keep losing all their clothes in the process…

REVIEW
Is it possible to have more than one soulmate in a lifetime?  If your soulmate died are you destined to be alone forever?  Does your moving on and being happy in every way possible mean that you're disloyal to them?  For Sal Kennedy, these are all questions she’s had to face.  Sally “Sal” Kennedy captured readers interest in her brother Mack and best friend Josie’s story, No More Mr. Nice Guy.  Sal is a twenty-six-year-old veterinarian living and working in Brisbane.  After surviving a horrible tragedy, Sal is a party girl, who uses men and sex to escape her nightmares.  She likes to pretend that she is happy and is a functioning member of the living world.  But this isn’t true.

Doyle Jackson is a twenty-eight-year-old freelance veterinarian.  He’s working with Sal at Kennedy Family Veterinary Practice while Sal’s brother Mack is out of the country.  Not only is Doyle working with Sal, he’s living with her as well. But Sal has made it perfectly clear time and time again that there will never be anything between them.  Unfortunately or maybe fortunately for Sal, Jose Cuervo has other plans.  Since Doyle has started living with Sal, things for her in the bedroom department just haven’t been the same.  With some liquid courage, she attempts to get Doyle out of her system.  Sal just isn’t prepared for Doyle to be different from other men and not bow down to her will.  Doyle wants more from Sal than just being a small distraction.  He wants a true chance and plans on making Sal step out of her comfort zone to get it.

A Brazen book should have me running to the shower to cool off.  Not, grabbing a tissue because I’m crying.  Well, this story actually did both.  I will never look at fairy floss the same again, thank you Doyle.

Ask Me Nicely is simply a wow read and brings two wonderful characters together.  Sal is broken but Doyle manages to see who she really is and not just the person she wants the world to see.  He fights for himself and for them as a couple.  He forces Sal to realize that anything is possible if you just ask nicely.

If you’re looking for a book with real everyday characters who can bring heat, passion, and emotions, this is definitely a book to read.

Doyle stopped by the blog for an interview.  You can see what he has to say here.