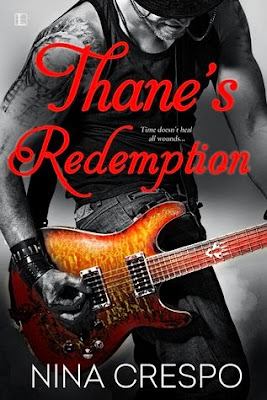 The one night she'll want to remember, she'll be forced to forget.
It's been almost a year since Celine's fiancé's death and she's still struggling to move on. But when she meets Thane, the super hot lead singer of Thane’s Redemption, she finds her desire reawakening, and her heart opening. Soon one kiss leads them straight into a night of heated passion…
Thane’s unexpected connection with Celine only leaves him wanting more of her—but his life makes it impossible. For Thane's Redemption is just a cover for a deeper secret: A former Army Ranger presumed dead, Thane is really a time-traveling, covert operative charged with saving the world from disaster. Each jump through time forces those around him to forget he ever existed—and Celine would be no exception. But can time work in their favor to give them a second chance at love? Or will a choice Thane makes in the future put Celine in mortal danger?

“Let’s go.”
Flutters swirled in her stomach as she hurried down the main corridor with him. No way was she escaping now.
He drew her close, and a weightless feeling, as if she sped down the hill of a giant roller coaster, rushed through her. Surprised, she stumbled into his chest.
“You’re all right. I’ve got you.” He kissed her temple.
She caught her breath as the light golden haze clouding her vision cleared. Moving out of his embrace, she stared at the main floor of the lounge. Either she’d lost her tolerance for the good stuff, or the bartenders were generous with the rum. How had they gotten there so fast?
Why didn’t she remember walking past those women in the hallway?
He squeezed her hand. “The song’s about to end. Come on.”
Channeling Lauren, she held her head high and kept her eyes trained on his back. As they moved closer to the stage, the keyboardist signaled the band. The tempo picked up. Sound vibrated over her skin, and her heartbeat matched the timing of the music.
Lauren spotted them and nudged Ari. The dark haired woman did a double take and her mouth fell open.
After what felt like the longest walk of her life, they reached the table. Celine sat down, and Thane stole a kiss.
As he moved away, he gave her a wink and panty-dropping smile. “Enjoy the show.”
Thankfully, somebody had ordered her another mangotini. Celine sipped and
acknowledged Lauren and Ari’s questioning looks with a shrug. Good thing the loud music kept them from asking questions. She couldn’t explain what had happened if she tried.
Thane jumped on stage and grabbed a microphone. He blended into a song driven by the keyboards and a fierce drumbeat. By the end of the song, worries about what their encounter did or didn’t mean slipped into the music. The eye candy on stage and the raw, lyrical power of his voice pulled her into the moment. Letting go of her inhibitions, she cheered and chair danced with her friends to the rock and blues-inspired tracks.
An hour into the set, he conferred with the band, and the bassist handed him an acoustic guitar. He put a stool center stage behind one of the microphones and sat down. “What I’m going
to perform now is a song I wrote a few months ago. No one’s heard it yet, but because you’re such a special audience, I’d like to play it for you.” His gaze found hers. “I hope you like it.”
He strummed the first chords, and the flamenco, rumba-styled rhythm brought up images of slow breezes and sultry nights. His voice flowed smoothly into the melody, and her heart squeezed.
Stay with me…lay your troubles down…let me set you free…
His singing inspired an erotic fantasy of her legs intertwined with his. Of gliding her hands over the hard ripples and valleys of muscle she’d felt holding onto him. Of her kissing him, and Thane devouring those kisses right back. The invisible touch of his words whispered over her skin. Every pulse beat, including the one between her thighs, magnified. She shifted in her seat, trying to quiet the steady throb as liquid heat spread low in her middle.
Ari playfully shoved her arm.
With a backdrop of thundering applause, she met Thane’s gaze. His desire matched her own. The band started to play another song, and he looked away. She exhaled a shaky breath and downed the rest of her drink.
A server stopped by their table and placed an envelope next to her arm. “Lucky girl, these are for you.”

REVIEW
Some stories shouldn't be novellas.  Not even to tease or tempt a reader into reading a new series.  Thane's Redemption is one of these stories and should have been a full length novel.  My reasoning?

1) Too much happened.
2) Too much has been left unanswered.
3) There's a strong possibility I'll need to do a re-read when #2 is released.

I liked it.  My 3 star rating is nothing to do with Nina Crespo's writing style, character likeability or the storyline.  These all impressed me.  It comes down to the fact that I'm sat here, somewhat scratching my head over what has happened and the lack of any particular answers.  There are simply too many loose ends and to me, this is a "look what you could've won" book, in that it tempts you and then it's over without any prizes being given.  And I know that many readers will be put off by that despite the promise of more.

I want to know more; without a doubt I shall be reading the next book in the series and am hoping that it's not a novella.  The potential is absolutely there for this to be a great series; I just need the chance to get my head into the story before the last page arrives.

**Received an ARC from the publisher in exchange for an honest unbiased review.** 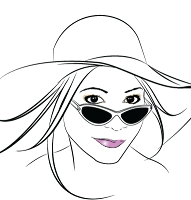 Nina Crespo lives in Florida where she indulges in her favorite passions — the beach, a good glass of wine, date night with her own real-life hero and dancing.
Her lifelong addiction to romance began in her teens while on a “borrowing spree” in her older sister’s bedroom where she discovered her first romance novel.
Curiosity about people and places, including what’s beyond the stars, fuels her writer’s imagination. This wellspring of inspiration allows Nina to create sensual contemporary stories and steamy paranormal tales, which she hopes will feed your own addiction for love, romance, and happily ever after.