Cozy Mystery Review ~ SHADOW OF A SPOUT by Amanda Cooper 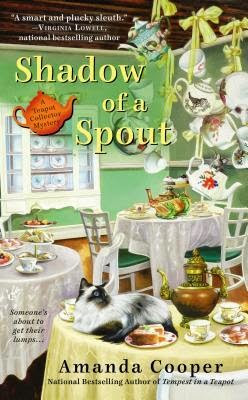 
Leaving her home in Gracious Grove behind her, Rose is off to the annual convention of the International Teapot Collector’s Society. Her granddaughter Sophie is minding the tea house while she’s away. Rose is eager for tough cookie Zunia Pettigrew to appraise a prized antique teapot she believes may be a holy water vessel from China.
But when Zunia declares the pot a fake, Rose is really steamed. After Zunia’s found dead beside Rose’s dinged-in teapot, Sophie must rush to her grandmother’s aid and find the real killer—before Rose is steeped in any more trouble…

REVIEW
Amanda Cooper is back with the second installment of her Teapot Collector Mystery Series, Shadow of a Spout.  This time, Rose Freemont and her BFF/employee, Laverne Hodge have traveled to Butterhill, New York, to attend the New York State charter of the International Teapot Collector’s Society (ITCS) annual conference.  Also in attendance are Rose’s Silver Spouts teapot collecting group from Gracious Grove as well as members from across the state. However, some members and charters decided not to show up due to their dislike of the ITCS New York president, Zunia Pettigrew.

The conference starts out well until Zunia is presented with several teapots to appraise.  When she’s rude to everyone who wants an appraisal including Rose, Rose can’t take it any longer and decides to stand up to Zunia.  No more than ten minutes later, Rose’s frenemy, Thelma Mae Earnshaw tells all those who will listen to her that Rose is dangerous and lies a little about events that took place in Tempest in a Teapot.

Later that night, strange encounters take place with several people arguing and fights breaking out.  Seriously, who would have known that people who are tea and teapot aficionados could be so violent?  Early the next morning, Zunia’s body is discovered along with Rose’s teapot.  With the teapot and Thelma’s lovely proclamation, the police are looking at Rose to be Zunia’ murderer. Once Sophie, Rose’s granddaughter, hears this news, she travels to Butterhill to protect her grandmother the only way she knows how, by finding the real killer.

“I am going to figure out who killed Zunia Pettigrew and hand him-or her-over to the police wrapped in a bow.”

Amanda has once again written a wonderful story of whodunit.  Zunia was not a well-liked person by any imagination.  The list of people who would be better off without Zunia around is endless; from her husband, to step-daughter, to founders of the ITCS New York chapter, and various other members.  Amanda has created characters who are really unbelieveable.  It appears that everywhere you look someone is trying to one up or backstab someone else. Shadow of a Spout is a tale of jealousy, adultery, and secrets galore.

At one point I was sure who the killer was, to only find out later I was completely wrong.  I mean seriously, talk about about being blindsided.  I still refuse to believe the actual killer really killed Zunia.  But if the spout fits. Readers are left wondering what will be next for Rose and Sophie when Sophie receives some news that could change her life.  I’m definitely looking forward to reading the next book.

Purchase Shadow of a Spout from:
Amazon | Barnes & Noble | Add to Goodreads

Tempest in a Teapot ~ Review