Review ~ THE READAHOLICS AND THE FALCON FIASCO by Laura DiSilverio 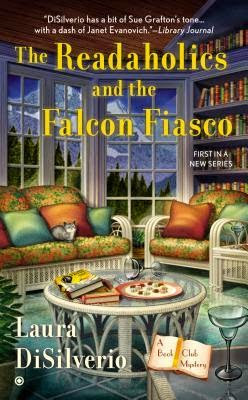 
Amy-Faye Johnson’s book club, the Readaholics, enjoys guessing whodunit in mysteries like The Maltese Falcon. But when a murder happens in their midst, they discover that solving crimes is harder than reading about them…

Amy-Faye has always loved her idyllic Rocky Mountain town of Heaven, Colorado. Her event-planning business is thriving, her fellow book-obsessed Readaholics are great, and her parents live only a few blocks away. But lately her hometown has felt a little less heavenly. First, she agrees to plan a wedding without realizing the groom is her ex-boyfriend. Then, Ivy, one of her fellow Readaholics, dies suddenly under mysterious circumstances.

The police rule Ivy’s death a suicide by poisoning, but Amy-Faye and the remaining Readaholics suspect foul play. Amy-Faye soon discovers that Ivy was hiding dangerous secrets—and making deadly enemies. Taking a page from her favorite literary sleuths, Amy-Faye is determined to find the real killer and close the book on this case. But finding the truth could spell her own ending…

REVIEW
Laura DiSilverio is a new author to me.  One of the reasons I wanted to read The Readaholics and the Falcon Fiasco was because it’s the first book in the series and because it provided the perfect cast of characters to become amature sleuths.  I mean seriously, who better to investigate murder than people who read about murder and discuss it for fun?

Amy-Faye Johnson is in her early thirties and is living a happy and content life, running an event planning business in her hometown of Heaven, Colorado.  A couple of years ago, she formed a reading group made up of several high school friends and others from town.

Heaven is a small town and boasts a population of less than ten thousand people.  Everyone seems to know everything that happens in town.  But it seems there are secrets no one knows about and Amy-Faye’s childhood friend and fellow Readaholic, Ivy Donner is going to take some things to her grave.

When Ivy dies, the police rule her death a suicide, but the Readaholics know that Ivy was happy, maybe a little upset about something but not suicidal.  They decide to put their sleuthing skills to the test with Amy-Faye leading the charge to prove the police wrong and catch a murderer.

With the help of Readaholic Maud Bell (conspiracy theorist extraordinaire) they’re able to break a code on some pretty damning evidence.  When that evidence goes up in flames, they all have to wonder just who they can trust.  They’re starting to discover things about Ivy they never dreamed of; leading them to wonder just how well do you know the people you are supposedly friends with.

In addition to proving her friend was murdered and trying to find her killer, Amy-Faye has to also come to terms with the fact that her on again/off again relationship with Doug Elvaston is permanently off since she’s been hired to plan his wedding to someone else.

The Readaholics and the Falcon Fiasco is told in first person and packs humor thanks to Amy-Faye’s assistant, Al Frink.  The romantic in me is happy about a possible budding relationship for Amy-Faye.  But what I loved was the web Laura DiSilverio has created with secrets, lies, and red herrings galore.  December can’t come fast enough for me to get my hands on The Readaholics and the Poirot Puzzle, the next installment in the Book Club Mystery Series.

**Received a copy from Penguin NAL for an honest and unbiased opinion.**

Purchase The Readaholics and the Falcon Fiasco from:
Amazon | Barnes & Noble | Add to Goodreads