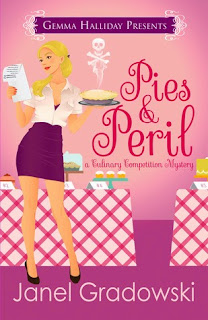 When Amy Ridley decided to compete in the Kellerton Summer Festival Pie Contest, the last thing she expected was to find the reigning pie queen, Mandy Jo, dead—a raspberry pie smashed on her face! Mandy Jo made fantastic pies, but she accumulated more enemies than baking trophies. But when Amy receives a note threatening her own life, she decides to do some investigating herself. 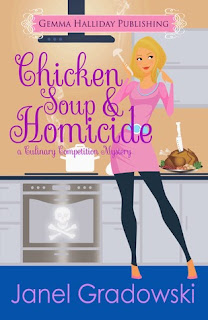 Amy Ridley and her friend, Sophie, have perfected their chicken soup recipe, and the winter-weary residents of Kellerton, Michigan can't wait to watch them compete against other local chefs in the Chicken Soup Showdown. But the charity event starts out with a bang, literally, when one of the rival chefs falls out of a freezer and onto Amy. If it wasn't stressful enough for Amy to catch a dead body, the detective in charge of the investigation targets her best friend, Carla, as the chief suspect in the murder.

Hi Kim! Thank you so much for letting me stop by.

Why do you write cozy mysteries?

I have loved reading cozies for many years.  I was so excited when I discovered my first Diane Mott Davidson book, the introduction to the culinary cozy genre. From the time that I really got serious about writing I had always wanted to do a cozy series “someday”.  Eventually I wrote a short story featuring Amy and Carla.  That turned into Pies & Peril, the first book in my Culinary Competition Series.  It’s definitely a case of my writing dreams coming true!

That’s awesome.  How do you write?  Do you start with an idea for the murder itself or do you think of a cooking event and work yourself up to the murder?

I usually come up with the contest first, along with the food that will be featured in it.  Although I don’t use that formula all the time.  I take a lot of notes in the first stage of planning a book.  That’s when I play with ideas and figure out what works best.  Often it takes me the longest to come up with the murderer and their reasons for committing the crime.

Your Culinary Competition Mystery series came out in 2014.  Your protagonist is Amy Ridley.  Can you tell us about her?

Amy is a former hairdresser.  When she entered a local cooking contest and won, she became hooked on competing.  Eventually she stopped cutting hair to focus on developing recipes and entering culinary contests.  She tends to think outside the box – a trait that helps her develop unique, prize-winning recipes as well as solve murders.

Amy is always and I do mean ALWAYS cooking something.  Where did she get her love of cooking from?

She grew up in a household where she had to cook for herself.  So she learned the basics from reading cookbooks while she was a teen.  After she married Alex she began experimenting more as she tried new foods and discovered new ingredients.  She rarely encounters a food that she won’t try at least once.

Do you also have some sort of cooking background?

No.  I never really cooked until I got married.  I quickly discovered that I was really bad at making easy convenience foods, like Hamburger Helper or Rice-A-Roni.  So I became obsessed with watching The Food Network and teaching myself how to cook from scratch.

You’re a Hamburger Helper failure.  Interesting...  The first book in the series is Pies & Peril.  Of course, with the name, you know it has to do with pies.  Do you have a favorite pie?

While I make a very good pumpkin pie, my family’s favorite, I love the Dutch apple (crumb-topped) pie from Judy’s Pies in Linwood, Michigan.  Judy’s is a tiny shop that has been in business for many years.  Their pies are so good they’ve even been featured in national magazines.

Of course, I had to ask about pies.  Now, I want a Dutch Apple pie. *sigh*  I love the characters in your series.  Are they inspired by anyone you know?

Amy’s tendency to look at things from different angles and come up with creative theories about the reason things are happening is me!  Although I have to say it’s a great personality trait to have for a mystery writer.  All of my characters are conglomerates of many different people, from friends to people I see on the street.  I really need to get a T-shirt that says, “Watch out!  You may end up in my next book.”

LOL.  That would definitely get people’s attention.  To date, the series consists of two books and a short story/novella.  How many more books do you have planned?

The next book will be out in early June.  A short story will also be coming out in an anthology this summer.  The fourth book in the series will be out in late 2015 or early 2016.

It seems I wanted every food item Amy mentioned in the book.  Did you come up with the recipes yourself?

I do come up with the recipes, but they’re the last thing I do.  Writing and developing recipes aren’t tasks that I can easily do at the same time.  Once I start writing a book I write as much as I can as fast as I can to get through the first draft as quickly as possible.  I lean on tried and true, quick and easy recipes when I am in writing mode.

I've mentioned there are a couple of books in the series already. What has surprised you about Amy, her friends and the series itself?

When I originally thought of Amy she was just a fun, kind of zany, kind of quirky, sort of over-the-top character.  As I’ve continued to write about her I discovered that she is a much stronger and caring than I had first envisioned. Carla morphed from just the deadpan sidekick that tamed Amy’s wild side to an integral part of the books who is often a fan favorite.

I am definitely a fan of Carla’s.  Are you currently working on anything that you can tell us about?

I turned book #3 in to my publisher on March 1.  That book centers around doughnuts.  Right now I am writing the short story for the anthology that will be released this summer.  It features barbecue.

Janel, thank you so much for taking the time to answer some questions for me.  I'm looking forward to reading more of your books.

Thank you for having me!  I loved answering your questions.

You can read my review of Pies & Peril here

Janel Gradowski grew up, and still lives, in the mitten of Michigan. She is a wife and mother whose writing companion is a crazy Golden Retriever named Cooper. In the past she has worked many jobs. Renting apartments, scorekeeping for a stock car racetrack and selling newspaper classified advertisements are some of the experiences that continue to provide inspiration for her stories. Now she writes fiction and is also a beadwork designer and teacher. She enjoys cooking and is fueled by copious amounts of coffee.

Her work has appeared in many publications, both online and in print. She is the author of three series. The Culinary Competition Mystery Series stars Amy Ridley, a former hair stylist with a passion for entering cooking contests. Her first women's fiction series is The Bartonville Series. Each volume contains stories ranging from flash to novella length. All of the stories are set in Michigan every volume contains accompanying recipes. The 6:1 Series features themed collections of her stories that are based on the title's theme.