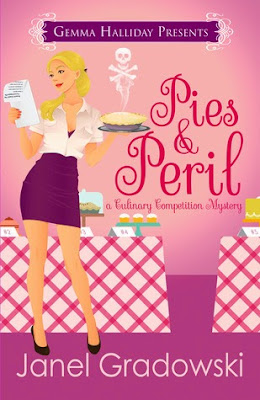 
When Amy Ridley decided to compete in the Kellerton Summer Festival Pie Contest, the last thing she expected was to find the reigning pie queen, Mandy Jo, dead—a raspberry pie smashed on her face! Mandy Jo made fantastic pies, but she accumulated more enemies than baking trophies. But when Amy receives a note threatening her own life, she decides to do some investigating herself.

REVIEW
Pies & Peril is the first book in Janel Gradowski’s Culinary Competition Mystery Series.  The series itself is off to a really great start with wonderful characters you can’t help but want to know.

It’s summertime in Kellerton, Michigan.  Amy Ridley plans to enter the Kellerton Summer Festival Pie Contest.  What she doesn’t plan on doing is discovering the dead body of Mandy Jo Pierce, her biggest competition and the devil’s spawn.

Amy has a really good heart and though she wasn’t Mandy Jo’s biggest fan, she feels she should be memorialized in some way.  Amy sets off a chain of events that turn her into a sleuth.  She tries to find Mandy Jo’s killer and gains the unwanted attention of her murderer.

Pies & Peril is filled with humor, mouth-watering food, and what seems to be a never ending kitchen pantry.  I can’t say that it was one of those stories I didn’t want to put down, but it was entertaining and kept my attention.  The murderer was easy to figure out, but the red herrings were definitely good and made you wonder.  There isn’t very much for me to not like about the book.  I will say I wasn’t a fan of the story being told in third person from the point of view from both Amy and her best friend, Carla.  It made the story a little hard to follow at times.  I’m looking forward to seeing what other cooking competitions Amy enters herself into and I’m also looking forward to Carla’s new relationship.

You can read my interview with Janel here