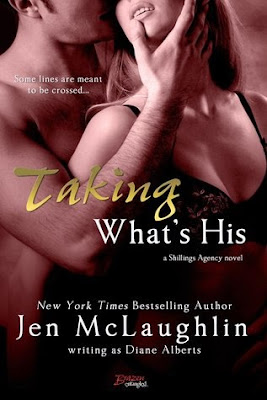 
Some lines are meant to be crossed...

One explosive device was all it took to turn Holt Cunningham from ass-kicking Marine to IT technician. Hell, he's still not over it. So when the cute little strawberry blonde at the bar asks him to kiss her, Holt can't resist the temptation of a sexy distraction. Before he knows it, she's blown his mind...and then skipped out the next morning.

Lydia Thomas never expected things with Holt to go quite that far, but oh, it was worth it. After being far too good for way too long, she was ready to be bad. Except that there's that tiny detail that Lydia kept to herself-Holt just spent the night doing naughty things...with his best friend's little sister.

One night isn't nearly enough. But with his friendship on the line, how far will Holt go in order to claim what's his?

REVIEW
Oh my God.  I’m in love with a Gamma.  Holt Cunningham is a thick-rimmed black glasses, plaid shirt wearing Clark Kent.  He’s former military with a dark, tragic past.  He’s a guy who’s up for one-night stands, but doesn’t do sleepovers or commitment.  He’s an IT guy for Shillings Agency and is one amazing coder. “You have no idea how dangerous a guy like me can be.”  Oh yes.  I am melting here.

“Geeks were the dirtiest, freakiest, sexiest men of them all.  Hands down.  And this guy might be the king of them all.”

Taking What’s His is a forbidden romance, featuring the best friend sibling troupe.  Holt is just....sigh.  Sorry.  Holt Cunningham is an IT guy for Shillings Agency, a security firm in Maine.  Like all the employees of the agency, he’s former military and sustained injuries while fighting in war.  He’s a soldier through and through and is not too happy that he’s now stuck behind a desk. He keeps the extent and pain of his injury to himself.

I wanna be Lydia Thomas.  She’s the younger sister of Steven Thomas, Holt’s best friend and co-worker.  Lydia is a recent college grad, with a degree in nursing.  She’s independent, strong, and self-assured.  In an attempt to make her former boyfriend jealous, she kisses Holt and agrees to one night of letting her inner bad girl go wild.

You hear all the time that a hero and heroine are perfect for each other for whatever reasons.  But seriously, Holt and Lydia are truly perfect for each other.  She understands his war injuries and is able to support him when he needs the support, whether he wants it or not.  Holt is the guy who allows Lydia to step out of her comfort zone and be the woman she wants and needs to be. He doesn’t believe he’s what she needs or is good enough for her but their chemistry between the sheets and out is playful and hot.

Diane Alberts continues to prove why she’s one of my must read authors with Taking What’s His.  If you’re looking for a hot read with loveable characters, this is the book for you.

You can check out Diane’s Taking What’s His Guest Post & Giveaway here.