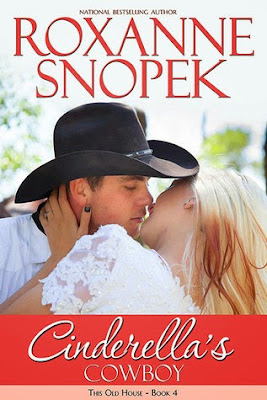 
Chad Anders doesn’t know why mousy Cynthia Henley trips all over her tongue when she’s around him. Nor does he understand his undeniable attraction to this good girl. Wild and sexy is his type, like the dream-girl he caught a glimpse of years earlier he’s never forgotten.

Cynthia’s superpower is invisibility, especially with men. It’s better for everyone that way. Besides, she’s got a cat. She’s okay. But when playboy-rancher Chad hires her, she’s got a chance to shine. Professionally, at least. Until she learns of his fascination with a mysterious dream-girl, who was actually nothing more than a shy teenager on an ill-advised dare all those years ago. Cynthia knows she’s no man’s dream-girl and never will be.

But there’s magic at the ball. Princesses glow in the starlight, princes appear out of nowhere, and, sometimes, they look a lot like cowboys…

REVIEW
Roxanne Snopek has saved the best for last.  Cinderella’s Cowboy, the fourth and final book in her This Old House Series is simply wonderful.  Best part, it can be read as a standalone.  This is the classic Cinderella fairy tale with a little twist.

Cynthia Henley isn’t your typical romance heroine, and I think that’s what makes this story that much more special.  Cynthia is strong, independent and all about family.

Chad Anders is your typical cowboy hero.  He’s known for one-night stands and just simply being a playboy.  But there’s more to Chad than what people see. Chad was first introduced to readers in A Sweet Montana Christmas.  I knew then I was going to fall for this cowboy.  It’s true, Chad is charming and loves to flirt, but he’s also caring and has a softer side.  Cynthia is definitely not the type of woman he usually goes for, but for some reason, he can’t get her out of his mind.

Chad hires Cynthia and her partners to create a brand for a charitable foundation established by his brother and himself.  He also wants them to put together a fundraising event to raise money for a local organization.  Due to the neglectful nature of her partners, who happen to be her self-absorbed, wealthy step-sisters, Chad and Cynthia end up working together very closely.  Much to the dislike of Cynthia, who gets a bad case of stuttering when Chad makes her nervous, which he does quite often.

Cinderella’s Cowboy was a refreshing, totally sweet romance with wonderful characters.  Roxanne has definitely saved the best book for last.  In typical Roxanne Snopek fashion, she has once again brought tears to my eyes, with the wonderful strength and courage of Cynthia.

**Received a copy from Tule Publishing in exchange for an honest unbiased opinion.**

You can check out my interview with Roxanne here.