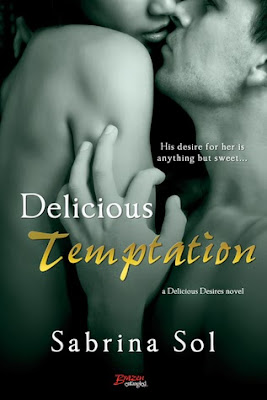 
Amara Maria Robles is a good girl. So good that she gave up her dreams of becoming a renowned pastry chef to help her parents with their struggling Mexican bakery. Yet her parents reject any changes she suggests, and refuse to sell her mouth-watering confections. Clearly being a good girl isn't paying off. So when her brother's sexy ex-best friend walks into the bakery, Amara's tempted to be very bad indeed...

After a scandal twelve years ago, resident bad boy Eric Valencia has returned to make things right with his family and friends. One glance at Amara and her wicked curves, however, and Eric finds himself thinking about how she’d feel beneath him—something he promised Amara's brother he would never think about, let alone do.

But this bad boy is in deep trouble...because Amara's determined to have her cake, and Eric, too.

REVIEW
Sabrina Sol has brought something Entangled Brazen has been missing, diversity.  A contributing factor to me wanting to read Delicious Temptation was because the hero and heroine were both Mexican American.  The fact that there was a bakery involved and the possibly of recipes had nothing to do with it.  Okay, maybe a little bit.

My takeaway from the book was that it’s real.  The hero, Eric Valencia has made mistakes in his past, but he’s trying really hard to atone for those mistakes. Unfortunately for him, when he left his East Los Angeles neighborhood twelve years ago, no one knew why he just disappeared.

Amara Robles has always had a sort of crush on her brother’s best friend.  She knew Eric had a less than desirable reputation and that her parents didn’t care for him, but that didn’t stop her heart.  When she finally sees him again, she can’t help but to want to take what he’s offering.

Amara and Eric are both characters who are at a crossroads in their lives.  Amara wants to prove to her parents that she knows how to run a successful bakery business and that her creations are truly good.  Eric just wants to start fresh and leave the reputation of being a bad boy behind.

The two start a secret relationship that turns out to be more powerful than either expected.  They each lie to themselves that the relationship is only temporary, but each secretly wonders if it could be permanent.

I think Delicious Temptation is a really good start to the Delicious Desires Series.  I have an idea of where this series is going to go and I’m looking forward to reading Brandon’s story.  I have a feeling his heroine is going to be Daisy (Amara’s cousin), I just wish it wasn’t them.  I say that simply because they are both pretty strong characters and I want them each to have their own story.  However, you definitely do see the undercurrent of tension between them.  I can’t wait for the next book.  My only complaint is that there isn’t an Epilogue.  I love seeing what happens to a couple after everything has worked out for them.