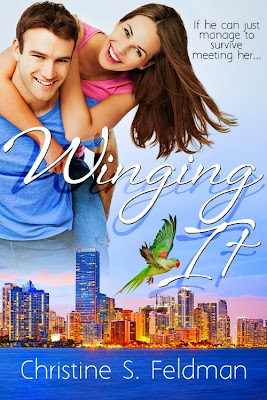 Up until now, straitlaced Simon Kirkendale has done an admirable job of keeping his high society mother’s demands for grandbabies at bay, but lately she’s kicked things into high gear.  So he isn’t too disappointed to delay her latest matchmaking attempt when a pretty stranger hops into the backseat of his car en route to one of his mother’s dinner parties and tells him to drive.  A car-jacking?  Nope.  More like a bird on the run, but this particular bird happens to be a parrot who has slipped its cage, and Simon’s new acquaintance desperately needs to get it back before she loses sight of it altogether.


Ever the nice guy—and okay, maybe also a little intrigued by the colorful Miss Juleen Pruitt’s sudden appearance in his car—Simon hits the gas pedal and obliges only to find himself unwittingly dragged into a wild goose chase around town for a bird who seems to be determined to either get itself killed or the two people trying to catch it.  Simon’s money is on the latter.
But it turns out that a little disruption and chaos in his life might just be what Simon needs most—especially if it comes in the form of Juleen.
If he can just manage to survive meeting her…

So here he was, dressed up in his best suit and tie and driving as slowly as he could manage without actually being late to his mother’s brownstone.


What was this latest one’s name—Francine?  No, wait.  Francine had been the one from the last dinner party.  This one was named Olivia and was probably every bit as much a carbon copy as all of the others who had come before.  His mother had a type.  Polished, poised, and possessing a family pedigree that could probably be traced all the way back to the Garden of Eden.  Possibly even earlier.  And they were all nice.  They were always nice.  They just weren’t for him.


And perhaps it was time to make that fact abundantly clear to his mother.  Just as soon as he did a little fact checking with his childhood obstetrician first.


The light turned green.  Simon was just about to put his foot on the gas pedal again, when someone opened the back door of his car and dived inside.


“That way!” the newcomer barked at him, her eyes wide and frantic in his rear view mirror as she leaned forward in a mass of unkempt dark curls to point past him and through his windshield.  “Drive!”


“What?” he responded brilliantly, blinking at her reflection as a fragrance that smelled vaguely like an odd combination of strawberries and paint fumes enveloped him.


Well, that didn’t sound good at all, whoever the aforementioned “him” might be, so Simon hit the gas.  The car leaped forward with a squeal of its tires, something it had probably never done before in its entire existence.  Volvos weren’t the most popular cars for chases.  But since this appeared to be a genuine emergency—the first in Simon’s life, actually—it was gratifying to see his car rise to the challenge.


“Which way?” he asked, peering in vain for someone who looked like he might be fleeing the scene and feeling adrenaline begin to course through his veins at the prospect.  A purse-snatcher, maybe, or even a burglar who’d been caught mid-burgle… Simon didn’t exactly possess mad street-fighting skills, but he could probably take on one of those kinds of guys all right.  Certainly from behind the wheel of his car, anyway.  Kind of gave “defensive driving” a whole new meaning.


He gave the steering wheel an abrupt yank, earning a few honks from other drivers.  Oops.  “Are you sure?  I don’t see—”


“Who exactly are we chasing?”


“Frankie!” was her muffled reply, and when he looked back in the mirror again, he saw that her head and half of her torso were hanging out the window.  In fact, she wasn’t replying to him at all, he realized.  She was calling out instead.  So much for his purse-snatcher theory.


A runaway child perhaps?  Or maybe an errant boyfriend, he considered with a pang of regret and a sour taste in his mouth since she was pretty in an unusual sort of way.  It would be just his luck to have an attractive woman throw herself into his car only to ask him to drive after another man for her.  And it would be just like Simon to do it.  Chivalry had been one of the things drilled into him as a boy, too.


Ah, well, he thought with an impish sort of satisfaction.  Then his mother really would have no one but herself to blame if he showed up a few minutes late for dinner this evening, would she?  At least, that was the tack he was going to take, especially if she started pulling out sonograms or something like that when she expressed her displeasure.  “What’s this Frankie of yours look like?”


There was no reply, just another frantic calling of the name.  With her head out the window as it currently was, she probably couldn’t even hear him.


He rolled down his window to stick his own head out, and when he was sure he could do so without wrapping the car around a tree or a lamppost, he risked a quick look back and called out, “I said, what does Frankie look like?”


They must have made an interesting picture to the folks in the cars around them.  Interesting in a cautionary tale sort of way.  Kids, take a good look, because if I ever catch you doing that…


“He’s wearing green?”  Yanking his head back in and veering around a slowpoke in front of them, Simon looked through the windshield in vain.  There was no one in green that he could see, not unless you counted that wizened little old lady in the green muumuu who was hobbling out of a candy store up ahead, and she really didn’t look like a Frankie.  Or like someone you’d have to chase by car.


Ah, wait.  The mysterious Frankie might be in a car himself.  Simon squinted ahead, trying to get a look at distant drivers wearing green.


“No, I said he is green.  Oh, shoot—he just zigged right!”  She smacked her hand—a very nice hand with bright blue nail polish on the tips of her fingers and what looked like a smear of plum-colored paint on one knuckle—against the doorframe in obvious frustration and wailed, “Can’t this thing go any faster?”


“He is green?” Simon repeated in surprise, zipping into the right-hand lane and rather impressed if he did say so himself by his ability to do it without clipping any of the fenders around them.  Car chases were turning out to be pretty invigorating.  Who knew?  “Who are we chasing—Kermit?”  Could she mean that he had green hair maybe?  Frankie could be a surly adolescent younger brother with a penchant for hair dyes and body piercings, and not his passenger’s boyfriend after all.  Simon perked up.  He could handle surly adolescents.  He did it every day.


“I’m chasing a bird?” he asked in disbelief, suddenly feeling a lot less like Steve McQueen roaring through the streets of San Francisco and a whole lot more like a certain coyote after a certain roadrunner.  Unless, of course, Frankie the Parrot was some sort of street name.  A really, really lame street name…

Purchase Winging It from Amazon

Winging It will also be available for purchase from:
Barnes & Noble and iTunes.

Christine S. Feldman writes both novels and feature-length screenplays, and she has placed in screenwriting competitions on both coasts.  She lives in the Pacific Northwest with her ballroom-dancing husband and Molly the beagle.