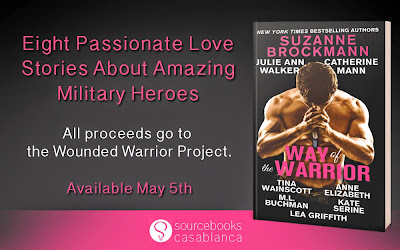 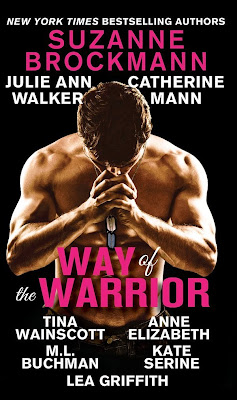 EIGHT PASSIONATE LOVE STORIES ABOUT AMAZING MILITARY HEROES by authors Suzanne Brockmann, Julie Ann Walker, Catherine Mann, Tina Wainscott, Anne Elizabeth, M.L. Buchman, Kate SeRine, Lea Griffith
To honor and empower those who've served, all author and publisher proceeds go to the Wounded Warrior Project.
The Wounded Warrior Project was founded in 2002 and provides a wide range of programs and services to veterans and servicemembers who have survived physical or mental injury during their brave service to our nation. Get involved or register for programs and benefits for yourself and your family online at www.woundedwarriorproject.org.

Suzanne Brockmann’s “Home Fire Inferno”
Navy SEAL Dan Gillman's wife, Jenn, goes into early labor while stranded in the California desert, as he's mission ready, overseas. With the help of his teammates, Izzy Zanella, Mark Jenkins, and the SEAL team's inimitable Senior Chief Stan Wolchonok, Danny realizes that Jenn's in good hands, thanks to the support of friends and family back home.
Julie Anne Walker’s “Hot as Hell”
He’s everything she swore she’d never love…
Harper Searcy knows a thing or two about Navy SEALs.  One, they’re all about the adrenaline high and not about settling down.  And two, they’re hot as hell.
She’s the one woman he refuses to let go.
When Michael “Mad Dog” Wainwright gets the call that terrorists have taken over the embassy where Harper works, he’s determined to save her life… and steal her heart.  But when it comes to weapons, warfare, and women, all bets are off.
Catherine Mann’s “In Plain Sight”
A fateful military mission leaves Tech Sergeant Gavin “Bubbles” Novak blind and ends his Air Force career. With nowhere else to go, he returns to his small Kentucky hometown with his seeing-eye dog and takes a job as a 9-1-1 operator. His first day on the job brings a voice from the past, the only woman who has ever blasted through that tough shell to reach his soul – his high school sweetheart Stacie Curry. She’s being stalked by her abusive ex-husband and he’s broken into her home.
Stacie Curry thought she made the safe choice in marrying the hometown boy rather than leaving with brooding outsider Gavin. But her decision has led to a nightmare existence. Since her divorce, she is stalked and terrorized by her ex. When she calls 9-1-1, she’s stunned to hear Gavin’s deep voice on the other end of the line. And when she sees him face to face afterward,  she’s shocked – and heartbroken – to learn he’s blind. But she soon finds Gavin will let nothing stand in the way of protecting her.
Tina Wainscott’s “Beauty and the Marine”
Griff Tate is a former Marine hiding his battle-scarred face. Kristy Marsden is a model hiding from a vicious stalker. Desperate to regain her life, she takes part in a phony reality show to lure him to the Tate family business: Mud’n Hunt. The competition to be “the best redneck chick” might be fake, but their chemistry as they share their scars is more than real. But as the trap is set, a killer is waiting for the right moment to tear them apart forever.
Anne Elizabeth’s “SEALed With Passion”
A Wounded Warrior project brings Navy SEAL LT Cmdr Jonah Melo face-to-face with the love of his life, the one who got away, Alisha Winters. When the two of them are together…sparks fly, and it will take all of his strength to win her heart for good. Anne Elizabeth's SEALed With Passion, when unexpected events take the heart by storm.
M.L. Buchman’s “NSDQ”
The Night Stalkers, the U.S. Army’s Special Operations helicopter regiment have a simple motto: NSDQ—Night Stalkers Don’t Quit! Any time, any place, any weather; they will deliver their team and they will get them back out.
Captain Lois Lang knows only one thing, flying combat search-and-rescue helicopters into the heart of the battlezone and getting her people back out. And when a CSAR mission gone wrong forces a decision about making the ultimate sacrifice—for her it isn’t a choice. Her crew and the wounded they’ve recovered always come first.
Kate SeRine’s “Torn”
If not for Sadie Keaton, Joe Dawson’s best friend since childhood and the woman he’s been in love with for as long as he can remember, he can’t imagine where he’d be. For the past year, Joe’s been struggling with PTSD after returning home from Afghanistan with the wounds that have left him scarred—both inside and out, and Sadie’s unwavering faith and support has been all that’s kept him going. But when they finally share an unexpected moment of passion, Joe has a hard time believing that Sadie could have feelings for the damaged man he has become and worries that her heart is being ruled by pity and not love. And those doubts are only compounded now that he’s set to resume his duty as a deputy sheriff. But when Sadie starts receiving messages from a secret admirer, messages that grow increasingly frightening and threatening, Joe has to put aside his self-doubt in order to save Sadie from her stalker and put an end to the bastard’s dangerous game before it’s too late to confess the truth of his heart.
Lea Griffith’s “War Games”

Rook Granger has been framed for a failed mission that took the lives of his entire Delta Force unit. As a soldier he’s dedicated his life freedom and truth. He’s given his heart, his soul, even a leg to the cause. He’s fought the good fight but in the bowels of the U.S. Disciplinary Barracks at Ft. Leavenworth, he’s given up hope. Then Olivia Bentwood walks into his cell and everything he thought he knew is scattered in the wind of her determination. He has no idea what she’s thinking, why she’s there, but when Olivia speaks, you have no choice but to listen. Her honor, integrity, her big brown eyes and the softness of her skin make him yearn for freedom. Then she does the unthinkable--she makes him realize he’s got some fight left. Though the truth drives him what he wants now more than anything is to keep Olivia safe, because Rook’s battle is only the first of many to come. The entity coming after them is much more dangerous and subversive than they realized and the world of war is about to change.