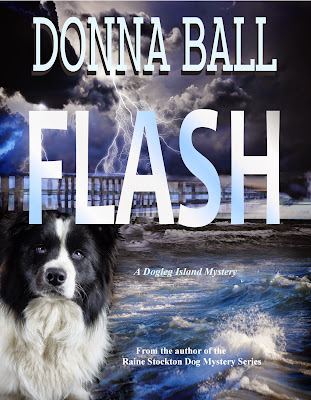 Almost two years ago the sleepy little community of Dogleg Island was the scene of one of the most brutal crimes in Florida history. The only eyewitnesses were a border collie puppy and a police officer. Since that time Flash has grown from a puppy into a vital part of the Dogleg Island Police Department, and has lived happily with the two people who rescued him on that horrible night: Deputy Sheriff Ryan Grady and Police Chief Aggie Malone.
Now the trial of the century is about to begin. The defendant, accused of slaughtering his parents in their beach home, maintains his innocence. Aggie and Ryan, the top witnesses for the prosecution, know he is lying. But only Flash knows the truth.
And with another murder to solve, a tangle of conflicting evidence to sort out, and a brutal storm on the way, the truth may come too late... for all of them.

For this blog tour the hosts had their choice of three excerpts to choose from.  I have to say, they all sounded really good.  Flash, the dog, sounds awesome.  It’ll be really interesting to see what he does to solve this case and protect those he loves.  I hope you enjoy this excerpt.

Sometimes understanding comes slowly, in small bits of truth and torn scraps of information whose jagged edges seem to bear no relationship to one another.  Sometimes the mind, working so hard to unravel the problem, to put those jagged pieces together into some kind of coherent whole, obscures the very picture it wants so badly to see.  And other times, often when it’s least expected, the picture comes together in a single flash of insight,  a sudden understanding, a moment of truth that changes everything.
That was the way it was for Flash as they stood there in the living room of the house where once blood had splattered and thunder had roared, where he had tried to chew through the bars of a cage to escape the smell of death and violence. As the man who had shot Aggie came around the corner of the room with another gun in his hand, everything that had puzzled Flash, everything he had been worrying over and trying to figure out,  suddenly made simple,  brilliant sense.
Just because it was done did not mean it was over.  Dead was not the end as long as the truth was still missing.  This was why Aggie and Grady and Bishop talked about it so much.  This was why they could not let what had happened in the past be buried in the past, even though they sometimes tried to pretend it was.
The squirrel in the yard.
The man in the lagoon.
Sometimes you had to go to the dark place and face the thing that terrified you the most for the sake of someone you loved.  It was all becoming clear to Flash now.

Behind the Scenes with FLASH
When I start a novel, I usually know three things about it: how it begins, how it ends, and the pivotal, or climactic scene of the book.  With a murder mystery, it’s also a good idea to know who did it (although I have been known to change my mind on that, just to keep things interesting).  The details of the crime—method, motive, and how the criminal evaded detection, will gradually become clear for me during the writing process.  But with Flash, all I knew when I started the book was what happened in the opening scene.  I actually had to solve the crime along with Aggie, Grady and Bishop—and I’m not even a detective!

As a matter of fact, my original intention was that murderer would not be apprehended in this book.  The authorities  would make an arrest, but only Flash would know they had the wrong guy.  I envisioned Flash as the kind of protagonist who would spend his life tracking down the real killer, never resting until justice was done—kind of like Ahab and Moby Dick, or Javert and Jean Valjean.  The more I got to know Flash, however, the more I realized he was not the kind of dog to obsess over revenge, and I wasn’t so sure I’d like him if he was.  So in the middle of the book the entire plot changed, and I had to go back and figure out who really did it.  The most fascinating thing about this process was that as I studied the hundred or so pages I’d already written, I realized that I had already left behind clues that pointed the way to a genuine suspect.  So, using only the evidence the police had gathered and the testimony they had taken, along with the events that were unfolding around them, I gradually – with the help of Flash, of course!—began to uncover the truth.  Wow, what a ride.  It was thrilling and terrifying, and I got a small taste of how frustrating it must be for those who solve real crimes for a living.  But as a writing method, I don’t recommend it—unless, of course, you’re lucky enough to have a canine sidekick like Flash to sniff out the suspects in advance. 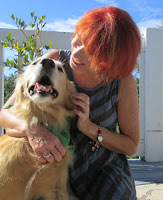 Donna Ball is the author of over a hundred novels under several different pseudonyms in a variety of genres that include romance, mystery, suspense, paranormal, western adventure, historical and women’s fiction. Recent popular series include the Ladybug Farm series by Berkley Books and the Raine Stockton Dog Mystery series. Donna is an avid dog lover and her dogs have won numerous titles for agility, obedience and canine musical freestyle. She divides her time between the Blue Ridge mountains and the east coast of Florida, and lives with a variety of four-footed companions. You can contact her at http://www.donnaball.net, or follow her on Facebook at Donna Ball Author Page.