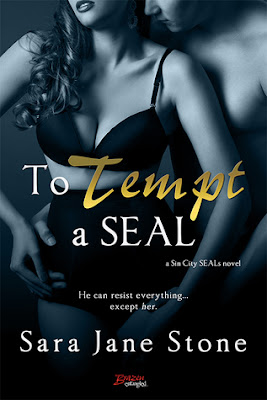 He can resist everything...except her.


For the first time in her life, art therapist Lucia Lewis is ready to live. And the masquerade ball in Las Vegas is just the place to find a ridiculously hot guy to complete her wicked to-do list. The only rule? Her elegant Venetian mask-which conceals the scars that have always held her back from the life she deserves-stays on.

Navy SEAL Cade Daniels heads to Vegas on a mission to keep his best friend's little sister out of trouble. Except the woman he's sent to find is all heat and flame...and perfectly capable of handling herself. And him. But the moment Lucia's mask slips, the need to heal her, body and soul, is complete and absolute temptation.

But revealing himself could cost him the one thing he isn't willing to risk...his heart.

“Don’t tell me you came for the artwork,” a deep, masculine voice said from behind her. She closed her eyes briefly, sucking in a sharp breath at the sound that seemingly had a direct line to the parts of her body craving male attention.


“What else would I come for?” she replied without turning to face him.


“I don’t know about you, but my eye’s been on a table filled with chocolate five feet away,” the mystery man said.


Chocolate. She opened her eyes. Melt-in-your-mouth sugary goodness came a close second to orgasms on her list of wants.


“What kind of chocolate?” She kept her gaze fixed on the bold red brushstrokes running through the center of the first painting.


He chuckled. “I didn’t look too closely. Does it matter?”


“The details are always important.” Like if the man behind her filled out his suit with a body that promised to make her dreams for tonight a reality. “Milk chocolate tastes different from dark. Do they have fillings that melt in your mouth or ones that explode with flavor?”


She felt him move closer. His heat merging with hers. Without the mask, she might have caught a glimpse of him from the corner of her eye, enough to know if the man matched the panty-melting voice.


“You like things that explode in your mouth?” he said, the words a low growl in her ear.


“Yes.” This man could read the phone book and leave her breathless and brimming with desire. But she wanted more than words tonight.


So she turned to face him.


And oh, God help her, she needed a taste of this man. Her lips refused to form the words “but I’m partial to caramel,” because one look and she was partial to him.
Mr. Panty-Melting Voice had a body that begged to be explored, worshipped, and painted. From his square jaw to the way he filled out his tuxedo, he looked as if he was auditioning to be the next James Bond. Maybe he was. This was Vegas, only a hop, skip, and a jump from Hollywood. And in her humble opinion, his short brown hair and green eyes were a lethal combination.


“I’ve been watching you stare at those paintings for the last few minutes,” he said, his full lips offering a hint of a smile beneath his plain black mask. “Without even glancing at the chocolate fountain.”


“There’s a fountain?” She heard the note of longing in her voice. Chocolate, carbs—those had topped the list of diet no-no’s for the past six months. But tonight, everything was on the table.


“Yes. You might have noticed if you had moved from this spot. So I have to ask, are you waiting for your date? A boyfriend?”


“No.” Her breath caught on the one word. This man had to be someone—a movie star, a model, the perfect male specimen—he couldn’t be for her.


But the thought of walking away and finding another man to explore her fantasies? Impossible. In her mind, she would hear this stranger’s voice. She’d spend the next forty- eight hours craving the deep sound, wishing she could listen to him murmur sweet nothings in her ear as they acted out her fantasies—or even better, his fantasies. If she walked away from him now, she would spend every minute until sunrise wondering about his top four, though she had a feeling he didn’t carry around a pink Post-it note with his wicked desires spelled out.

Headline: My Favorite Party Game: Ask the Author!
Thanks for inviting me to chat writing and my latest super sexy release, To Tempt a SEAL!
I’m a huge fan of Facebook parties. After spending most of my day glued to my keyboard or chasing my preschool-age kids, I love interacting with readers. And I’m crazy about party games! Ask the Author is one of my favorites. I love answering readers’ questions. (smiles)
I asked my street team, Sara Jane Seducer’s, to play a round of Ask the Author.
Seducers: What is your favorite part of writing? And your least favorite part?
SJS: I love revising a story. My editors (and my agent when she gets a chance to read my early drafts) offer the best feedback. I love taking their thoughts and reworking the story. As for my least favorite part—I would have to say proofreading. I have a very hard time finding the missing words and grammatical errors in my own work. So if the copy editor missed something I’m unlikely to find the error. Thank goodness I have such wonderful copy editors!
Seducers: When you "create your hero" do you start with a picture? Do you build as you go or do you do a character study answering questions about his past, present, family, friends, school and so forth?
SJS: I never start with a picture. Those always come later. My heroes walk into my imagination and I start writing. The details fall into place as I get to know them. I’ve tried the other approach, but it doesn’t work for me. Just like the heroine (and the reader) does not know everything about the hero from page 1, I don’t think I should either. Also, I’ve never found a picture that perfectly matches the hero in my imagination.
Seducers: If you had to choose one of your men to be your only book boyfriend who would you choose and why?
SJS: U.S. Navy SEAL Jack Barnes from To Dare a SEAL, the second Sin City SEALs book. Readers meet him in To Tempt a SEAL, but just wait until book two. I recently finished writing this one and Jack is soooooo sexy.  And he makes me laugh. While I was writing, I would sit at my computer giggling to myself. Thank goodness I rarely write in public places! And Chad Summers from Hero By Night, the third book in my Independence Falls series ties for second place alongside Cade from To Tempt a SEAL.
Seducers: Out of every book you've read - which would you say your favorite is?
SJS: Just one? Wow. That is so hard! I’m madly in love with Suzanne Brockmann’s Troubleshooter series. Her stories introduced me to military romance and I reread them all the time. But to pick just one? Probably Hot Target seeing as that was my very first.
Seducers: If you had to be something other than a writer what would it be?
SJS: If I had to choose a different job, I would love to raise and train horses. I grew up riding and would love to own a stable full of horses. Although I would have a lot to learn about training. And hopefully I’d still be able to pick my kids up at school at the end of the day. That’s one of my favorite perks of being a writer/stay-at-home mom. (smiles)
Have a question that I didn’t answer? Leave a comment and I’ll do my best to respond! And if you’d like to join Sara Jane Seducers go to:  facebook.com/groups/324831797700603/

After several years on the other side of the publishing industry, Sara Jane Stone bid goodbye to her sales career to pursue her dream-writing romance novels. Sara Jane currently resides in Brooklyn, New York with her very supportive real-life hero, two lively young children and a lazy Burmese cat. Join Sara Jane’s newsletter to receive new release information, news about contests, giveaways, and more! To subscribe, visit www.sarajanestone.com and look for her newsletter entry form.

a Rafflecopter giveaway Follow
Posted by Kim at 5:15 AM