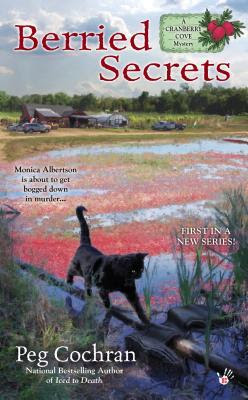 
When Monica Albertson comes to Cranberry Cove—a charming town on the eastern shore of Lake Michigan—to help her half-brother Jeff on his cranberry farm, the last thing she expects to harvest is a dead body.

It seems that Sam Culbert, who ran the farm while Jeff was deployed overseas, had some juicy secrets that soon prove fatal, and Jeff is ripe for the picking as a prime suspect. Forming an uneasy alliance with her high-maintenance stepmother, Monica has her hands full trying to save the farm while searching for a killer. Culbert made plenty of enemies in the quaint small town…but which one was desperate enough to kill?

REVIEW
Monica Albertson has recently moved to Cranberry Cove, Michigan to help her half-brother, Jeff run his cranberry farm called Sassamanash Farm.  Jeff has recently returned after a year long deployment to Afghanistan, where his left arm was paralyzed. While Jeff was away, he trusted the farm and the running of it to its former owner, Sam Culbert.  Sassamanash Farm is running in the red and when Monica looks at the financials, she discovers Sam was embezzling money from the farm.

It’s harvest time and as Monica is helping Jeff and his staff harvest a cranberry bog, she discovers the body of Sam Culbert.  Not only is there a dead body to deal with, Jeff’s mother and Monica’s step-mother, Gina arrives.  Monica is sure the police are going to discover Sam was stealing money from Jeff and the farm and she’s afraid they’ll make him the prime suspect.  Monica and Gina form an unlikely alliance and team up to discover who really killed Sam.

Once Monica starts asking around, she discovers Sam wasn’t a very well-liked person and thus trying to figure out who killed him is more difficult.  I love the cast of characters Peg has created for the Cranberry Cove series.  Monica isn’t one of those characters who truly openly does her own investigation, she just merely asks little questions and listens to what people tell her.  The detective involved isn’t one of those “mind your business” types and is pretty open to what Monica has to say.  I would love to say I figured out who the true culprit was early own, but I didn’t.  I did however figure it out, the why was a different story.

Berried Secrets is a wonderful start to Peg Cochran’s Cranberry Cove series.  I will admit I’m not a lover of cranberries, but I swear everytime Monica started cooking one of her delicious recipes I wished I could jump into the book and eat a few.  I can’t wait to actually attempt to make one of the recipes included in the book myself.  I also can’t wait to read the next book in this series.