Review ~ TOO HARD TO HANDLE by Julie Ann Walker 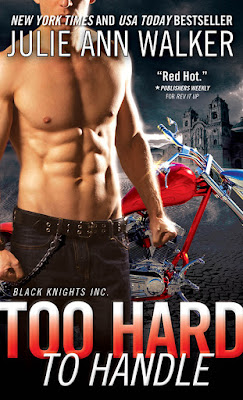 Dan "The Man" Currington is back in fighting form with a mission that takes him four thousand miles south of BKI headquarters, high in the Andes Mountains of Peru. He's hot on the trail of a rogue CIA agent selling classified government secrets to the highest bidder, when Penni DePaul arrives on the scene. Suddenly the stakes are higher, and keeping Penni safe becomes Dan's number one priority.

And this time she's ready

A lot has changed since former Secret Service Agent Penni DePaul last saw Dan. Now a civilian, she's excited about what the future might hold. But before she can grab onto that future with both hands, she has to tie up some loose ends-namely, Dan Currington, the man she just can't forget. And a secret that's going to change both their lives-if they can stay alive, that is.

REVIEW
Too Hard to Handle is the eighth installment in the Black Knights Inc. series.  It picks up a few months after a tragic incident where several Secret Service Agents were killed. During this same event, Secret Service Agent Penelope “Penni” Depaul and BKI member Dan “The Man” Currington hooked up and may have made a connection.  Now Penni has resigned from the Secret Service and set out on a personal mission to find Dan and bare all to him.  Unfortunately, she ends up dropping in on him while he is on a supposedly fruitless mission in Peru.

As is always the case, Penni and Dan have not disclosed their feelings to each other. Penni also has a life altering secret that she needs to share with Dan.  Penni just so happens to become inserted in Dan’s new mission although she is no longer a member of the Secret Service.  It’s always about revenge or redemption.  There is nothing like trying to work through feelings while working a covert op.  Too Hard to Handle has all of the usual cliches but it’s also a very fun read.  Not only is there plenty of angst between Penni and Dan, there’s another duo that has unrequited feelings for each other that plays out with some interesting banter.  There’s also plenty of action, violence, and gun play.  There’s even a bat cave to add to the mystery.  And did I mention that the Black Knights report to the President of the United States which means they have an array of resources and gadgets at their disposal.

It’s been awhile since I read the previous book so it took a minute for me to catch up. Consequently, I would recommend that you read the previous books before you read this one in order to get a better understanding of the team dynamics of BKI , their cover story, and Penni and Dan’s prior encounters.  Dan and Penni have a tendency of coitus interruptus that has to be a running joke for the author.  It has to be challenging to weave romance, humor and espionage together but Too Hard to Handle does it nicely. There are some brutal scenes but the humor lightens things up fairly quickly.  I would definitely be interested in reading another book in the Black Knights Inc. series.

**Copy received courtesy of Sourcebooks for an honest and unbiased opinion.**

The Black Knights Inc. Series:
(Click on the book covers for more information and/or to purchase from Amazon.)

Click here for an excerpt of Too Hard to Handle and enter to win a signed set of the Black Knights Inc. Series.

Julie Ann Walker is the USA Today and New York Times bestselling Author of the Black Knights Inc. romantic suspense series. She is prone to spouting movie quotes and song lyrics. She'll never say no to sharing a glass of wine or going for a long walk. She prefers impromptu travel over the scheduled kind, and she takes her coffee with milk. You can find her on her bicycle along the lakeshore in Chicago or blasting away at her keyboard, trying to wrangle her capricious imagination into submission.