Review ~ UNEXPECTEDLY HIS by Maggie Kelley 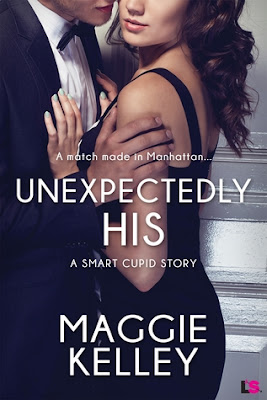 
A match made in Manhattan...

By-the-book Marianne McBride wants to prove she's more than a computer geek in a pair of horn-rimmed glasses. But how did she end up hiding in a cake, waiting to sing "Happy Birthday" to Nick Wright, a sexy and arrogant serial-dater? Not exactly part of her plan. Especially when she finds herself kissing the birthday boy, and then running like hell...

Nick falls for no woman. No strings, no commitments, and no relationships. Not even with the sweetly curvaceous bombshell from his birthday. But then he's hit by a bombshell of his own. He needs to find the perfect faux fiancée, or kiss his key to the executive washroom goodbye. Fortunately, his matchmaker sister has the perfect girl in mind.

Now Nick and Marianne have to pretend they're in love for six weeks. No dating. No sex.

And definitely no acting on the wickedly-hot chemistry that could ruin everything...

REVIEW
Simply put...I loved Unexpectedly His.  Marianne McBride is a nerdy geek girl who is so into numbers, it isn’t even funny.  For exactly, five months, fifteen days and six or seven hours she has been crushing on her best friend and boss’ brother, Nick Wright.  But Nick is the love them and leave them, no back to back dates kind of guy.

When Nick is told he’s a shoo-in for partnership at his firm, he’s also told that his bachelor ways may keep him from having his dream job.  In a panic, he admits to having a fiancée.  Desperate to find someone to fill the bill, he calls his sister who just so happens to be one of the top matchmakers in Manhattan.  Jane comes through immediately with Nick’s perfect match, her assistant, Marianne or new girl as Nick likes to call her.

Being in a bind of her own for a date to a family event, Marianne agrees, as long as he will play the role of her boyfriend with her family.  Nick and Marianne agree to a six week fake engagement that includes living together, not seeing other people, and absolutely no sex.

Things change when Nick and Marianne are forced to kiss each other and he realizes she’s the woman who jumped out of his birthday cake and kissed him.  The same woman he hasn’t been able to stop thinking about.

Unexpectedly His was one of those feel good stories.  You have the Marilyn Monroe loving, computer nerd girl getting the hot sexy bachelor.  Over the course of the book, Marianne and Nick became friends who cared about each other to lovers with Nick letting Marianne see parts of himself he doesn’t show people.

I will admit to thinking the book was going to be predictable but I was pleasantly surprised by a little twist.  Maggie Kelley has written extremely likeable characters that allow you to become invested in their story and their journey to a happily ever after.  Unexpectedly His is the second book in the Smart Cupid series but is totally a standalone read.  There wasn’t anything about this book I didn’t like.

The Smart Cupid Series:
(Click on the book cover for more information or to purchase from Amazon.)