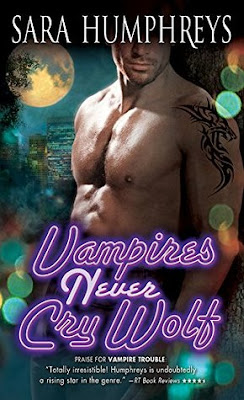 Vampires Never Cry Wolf (Dead in the City, #3)
by: Sara Humphreys
Series: Dead in the City
Genre: Paranormal Romance
Release Date: March 3, 2015
Source: Publisher ~ Sourcebooks Casablanca
Amazon | Barnes & Noble | iTunes | Kobo | Google Play | Goodreads
Vampires are nothing but trouble...
As far as beautiful vampire Sadie Pemberton is concerned, werewolves shouldn't be sticking their noses into New York's supernatural politics. They don't know jack about running a city-not even that hot-as-sin new vampire-werewolf liaison who's just arrived in town.
Werewolves are too sexy for their own good...
The last thing Killian Bane wanted was to end up in New York City playing nice with vampires. Unfortunately, he's on a mission, and when he encounters the sexiest, most stubborn female vamp he's ever met, he's going to have to turn on a little of that wolfish charm...and Sadie's going to learn a thing or two about what it means to have a wild side...
REVIEW


Vampires Never Cry Wolf is part of a larger series involving vampires.  However, it is the first book in the series that I have read.  Actually, it may also be the first vampire book that I have read as well.  I have read several books regarding werewolves though. Of course, I have seen plenty of movies on both subjects so my knowledge in this paranormal area is fairly significant.  Consequently, I do love the spin that Sara Humphreys has put on these supernatural creatures.  She has anointed them with some old and new characteristics that I felt were intriguing.  Vampires Never Cry Wolf is not only a romance, it also has a political element to it as well.


Sadie Pemberton is a 200-year-old vampire that owns a nightclub always packed by unsuspecting humans.  Currently, her nightclub is being frequented by a tantalizing and off limits werewolf prince named Killian Bane.  His intention to open up a similar nightclub in the vampire ruled city of Manhattan causes a stir amongst both races although they have entered into a treaty.  Sadie and Killian do their best to suppress their obvious attraction to each other.  However, circumstances eventually push them too close for comfort and they begin a steamy relationship that clearly shows them that they are meant for each other regardless of the rules against their particular type of relationship.  In addition, a tragic event from Sadie’s tortured past takes center stage and creates a twist that no one could have seen coming.  Plus, there’s a kidnapping, death threats, and even a ghost.

Vampires Never Cry Wolf had a lot to appreciate.  Sadie and Killian are enthralled in some hot sex scenes that literally make a vampire’s heart beat.  Read for yourself to see how that’s even possible.  I was truly entertained and look forward to reading other books in the series.