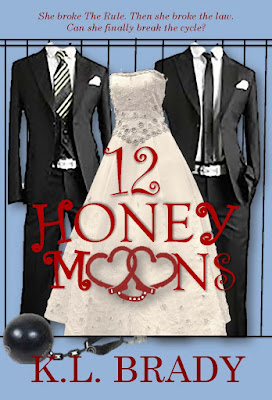 Miki Vincent's entire life stalled because she's addicted to the beginnings of things, especially relationships. She relishes in the emotional highs, first hugs, first kisses that new love brings. But sex always ruins it. That's why abstaining during the first three months of a relationship—following the 90-day rule—was supposed to help land her down the aisle with Mr. Right. Miki finds out the hard way, Mr. Wrong can wait that long, especially if his ultimate prize is her inheritance.
One assault charge and depression later, Miki devises the Honeymoon Plan, guaranteeing her a lifetime of firsts and zero heartaches. But following her own rule sends her life into an out of control spiral in which she's sentenced to more than perpetual break-ups. A new pursuit and a string of sexy suitors offer her the opportunity to jumpstart her life and test her new strategy. The only problem? It just might work.
Miki's best friend Pam, a repressed artist, struggles to keep her honeymoon alive but she can no longer ignore the blatant evidence staring her in the face: Her husband is having an affair. A different kind of "honeymoon plan" designed to free her from her troubles, and a chance meeting with a handsome artistic stranger, help reignite her passions. But will they destroy her marriage in the process?

My Grandma Pearl once told me there are two kinds of men: the ones who will make you count your blessings, and the ones who will make you want to start counting from zero to forget they ever existed.
Mitch Wiggins fell into the latter category. He made me determined to not only start again...but to start better. The end of our disastrous liaison quite literally drove me from love’s hangover straight to Circuit Court... in a brand new S-Class with a dented rear fender. The real shame of this sham was that I had him pegged within days, maybe moments, of meeting him. The red flags went up and flapped like crazy, batted against the winds of Deceiving Bastard, but I convinced myself to ignore the warnings and continue with the charade. And finally, I figured out the real problem.
The Honeymoon.
See, at that time, I still viewed “the honeymoon period” in a relationship as a wonderful pit stop on the yellow brick road to everlasting happiness—and I was wrong. So wrong. The actual truth was concealed behind the blare of my biological clock, which was ticking like an Old & Barren bomb merely seconds from exploding over the remnants of my life.

Hi K.L., welcome to Read Your Writes Book Reviews.  First off, I have to say I really like the cover.

Thank you! I designed the cover myself. I had a very specific vision of what I wanted and paid graphic designers to produce them for me, but I was never satisfied. Normally I would never venture out of my lane (writing) but I took an InDesign class for work and was just crazy enough to think I could do this myself. It turned out pretty well between InDesign and taking Photoshop tutorials on YouTube. I’ve since done a few more covers for my novellas. I love it. I guess there’s a little artist living inside me next to the writer.

Tell me about your character, Miki Vincent.  Why is she afraid of relationships?

Miki has a fear of failure, whether it’s jobs or relationships. She’s grown up with very successful attorney-parents who have a successful marriage, and I think she was just afraid she’d never live up to that standard. Instead of trying her best to find her own standard and meet that, she’s just decided she’s not going to commit to anything or anyone. Thus, she ends up going from man-to-man and job-to-job trying to find herself and find love, but disaster seems to follow. And she experiences quite a bit of that disaster in this book. But the great thing about ruin and disaster is that they lead to rebuilding. And that’s what happens to Miki—in all areas.

What exactly is the "honeymoon plan"?

Miki develops The Honeymoon Plan after a serious lack of success employing the 90-day rule. This rule says you shouldn’t sleep with a man until you’ve dated 90 days. She followed this rule, and the guy STILL runs off, and right after bilking her of thousands of dollars.  Miki decides, in her infinite wisdom, that when she looked back on all of her relationships there was one common factor. The first 90-days—the honeymoon phase with the butterflies, affection, dinners out, first kisses, and no arguing—was always the best part. That was about as long as any guy could keep up the good guy act. So instead looking for guys to marry, she was just going to enjoy as much of that first 90 days as possible and then break off the relationship before things went sour. She ends up finding out that her plan works at first, but there’s a big catch.

Tell me about one of your favorite scenes from the book.  And, why is it a favorite.

One of my favorite scenes in the book happens when Miki’s life takes an express trip to rock bottom, and she ends up in the wrong place and wrong time and gets arrested. She’s led this upper-class socialite life, and when she gets arrested the cop treats her like regular people, so she gets a huge dose of reality. It was a life-changing experience for her that propels her to a dark moment when she’s forced to figure out why her life is so incredibly stalled.

12 Honeymoons is a romantic comedy.  Give me your best one liner from the book.

I cannot be the judge of “the best” but here’s one that makes me chuckle. “I wished I could plead temporary sanity because beating him down in the street like a purse-snatcher on payday served as a sign that I had finally come to my senses.”

Oh my gosh!  I love that!! What do you think is the recipe for a happily ever after?

On the surface, my readers would probably say my recipe for happily ever after is usually “the girl gets the guy.” But it’s bigger than that for me in all of my stories. The girl usually doesn’t get the guy until she’s worked out whatever internal issue is keeping her from being the best version of herself. And I do believe that in stories and in real life, when you become the best version of yourself, you will find the man who brings out the best in you.

I have to totally and completely agree with you.  K.L., thank you so much for taking the time to answer some questions for me.

Thank you so much for hosting this interview. It was really fun and you asked some great questions. I’m already working on the 31 Days, which is the follow-up to 12 Honeymoons. It will be release in the summer of next year.

I look forward to learning more about 31 Days.

K. L. Brady is a D.C. native but spent a number of her formative years in the Ohio Valley. Her writing career started in the pages of diaries when she was 7 or 8 years old. But it wasn’t until her 40th birthday and an Oprah “Live Your Best Life” moment that she finally answered her calling and wrote her first novel–The Bum Magnet. The originally self-published novel was picked up by Simon & Schuster in a two-book deal, and K.L. hasn’t looked back since, penning the follow-up, Got a Right to Be Wrong and self-publishing the first books in two young adult series and a spy thriller series based on her 20+-year career in the U.S. Intelligence Community.
She has a B.A. in Economics, an MBA, and is a member of the Maryland Writer’s Association, Romance Writers of America, Sisters In Crime, and International Thriller Writers. She’s addicted to writing and chocolate—not necessarily in that order—and currently lives in the Washington D.C. area with her son. She is hard at work on several projects, including the next installment of the series.

a Rafflecopter giveawayFollow
Posted by Kim at 4:00 AM