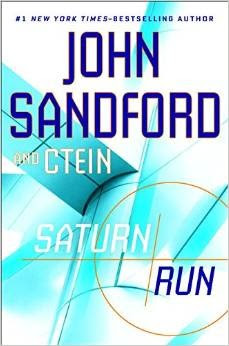 
The year is 2066. A Caltech intern inadvertently notices an anomaly from a space telescope—something is approaching Saturn, and decelerating. Space objects don’t decelerate. Spaceships do.

A flurry of top-level government meetings produces the inescapable conclusion: Whatever built that ship is at least one hundred years ahead in hard and soft technology, and whoever can get their hands on it exclusively and bring it back will have an advantage so large, no other nation can compete. A conclusion the Chinese definitely agree with when they find out.

The race is on, and an remarkable adventure begins—an epic tale of courage, treachery, resourcefulness, secrets, surprises, and astonishing human and technological discovery, as the members of a hastily thrown-together crew find their strength and wits tested against adversaries both of this earth and beyond. What happens is nothing like you expect—and everything you could want from one of the world’s greatest masters of suspense.

REVIEW
As far as my reading tastes are concerned, I don’t tend to read many true science fiction books.  I do watch plenty of science fiction on the big and small screen.  And, I grew up watching Star Trek and Star Wars.  Saturn Run was very much in that same vein.  It’s based 50 years in the future and we still haven’t ventured too far into space.  Everything about this book is actually very realistic considering where we are today.  Saturn Run covers politics, the space race, PTSD, and even social networking.  The authors do a great job of immersing you into the era and really made me feel like I was watching this story unfold directly in front of me.  The level of detail was overwhelming at times but I appreciated it anyway.

Saturn Run is about what happens when a U.S. observatory’s telescope picks up what appears to be an enormous alien starship docked amongst the rings of Saturn.  Fearing that the Chinese will eventually find out and re-route their own mission to Mars to explore this starship and get ahold of it’s technology, the U.S. scrambles to retrofit their own space station and race to Saturn.  Of course, the Chinese do discover the starship and make their way to Saturn as well.  Both the U.S. and the Chinese have some challenges getting to Saturn but they eventually make it.  Everything that happens in between is very entertaining and compelling.  Readers get an in-depth account of crew interactions along with how they must overcome sabotage and personal conflicts to complete the mission.

One of the central characters, Sanders Darlington is not what he appears to be. Everyone thinks that he is just a rich slacker but the voyage will reveal that he has multiple layers to him that will make him a very valuable asset to the mission.  He will also become involved with a female passenger, and that relationship will add an interesting storyline to the book that I thought was equally intriguing.  I could go on and on about how much I enjoyed this book and it’s characters.  Note that the book is also rather long so be prepared to find your quiet space and jump right in.  The political posturing alone is enough to keep you occupied to the very end.

**Received a copy from Penguin Group in exchange for an honest unbiased opinion.**