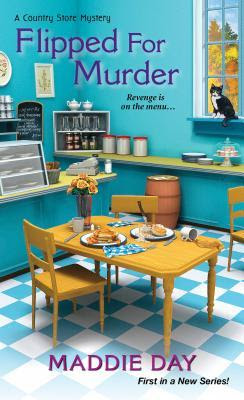 In this freshly baked series, author Maddie Day lifts the lid on a small town in southern Indiana, where a newcomer is cooking up a new start--until a murderer muddles the recipe...

Nursing a broken heart, Robbie Jordan is trading in her life on the West Coast for the rolling hills of southern Indiana. After paying a visit to her Aunt Adele, she fell in love with the tiny town of South Lick. And when she spots a For Sale sign on a rundown country store, she decides to snap it up and put her skills as a cook and a carpenter to use. Everyone in town shows up for the grand re-opening of Pans ‘n Pancakes, but when the mayor's disagreeable assistant is found dead, Robbie realizes that not all press is good press. With all eyes on her, she'll have to summon her puzzle-solving skills to clear her name, unscramble the town's darkest secrets, and track down a cold-blooded killer--before she's the next to die...

Hi Maddie.  Welcome to Read Your Writes Book Reviews.  How are you?
I’m great, and happy to be here.
How did you go about creating your characters for Flipped for Murder? Did you have any inspirations?
I really just make them all up. My protagonist is not from the area, so I created her Aunt Adele, who raises sheep and was both the former mayor and the former fire chief of the small town where the series is set. Adele is a no-nonsense 70-year-old, but cares very much for Robbie and is her anchor. The only character vaguely based on a real person is the current mayor, whom I modeled physically on someone I knew for a few years, so she’s tall, wears heels and suits, and has not only big hair but a big smile, too.

Tell me more about Robbie Jordan.  How old is she, what is she like?
She’s 27, a chef and carpenter, and originally a Californian. About 5’3”, she has curly dark hair, generous hips, and a sense of humor.  She loves doing puzzles as well as heading out on her bicycle for a hilly twenty miles to clear her head. She was burned by an ex-husband who left her for a curvy fighter pilot, and Robbie moved to the Midwest to start over.

How and why did you decide to set the Country Store Mystery Series in South Lick, Indiana?  Is it based off of a real town?
I lived in southern Indiana for about five years several decades ago, and I love that part of the world. Some friends at the time had bought an old country store and fixed it up into a bed and breakfast place, which was the inspiration for the series. I made up South Lick, but I set it in the very real Brown County, which is as hilly and scenic as New Hampshire or Vermont.

What's your writing style like?  Do you start out with an idea of how the person is going to die and then figure out who dies and why?  Or do you just somehow let the story play out?
Yes, sometimes I decide on the victim and the murder weapon first and then figure out the rest: a pool of plausible suspects, how my protagonist will uncover the bad guy, and so on. But I definitely don’t plot the whole story out ahead of time. I think I would be bored writing the book if I did – and if I’m bored writing it, you’ll surely be bored reading it.

What's the most difficult part about writing a cozy mystery?  And what's the best part?
For me, writing any mystery gets tough in the middle. When I’ve written half the book but I’m nowhere near the end, it’s hard to get my arms around the whole story. I always do it, but there’s a lot of going back to earlier scenes and rereading to remember what I’ve already put down and what I haven’t. The best part is putting the world to rights again at the end. In a cozy, justice is always served and the community is restored to balance – well, except for the victim and the villain, of course!

When and where do you write?
I write every morning except Sunday. Morning is my creative time, and when I’m writing a first draft I set myself a word count goal, with 1000 words as a minimum. I’m lucky to have a lovely second-floor office in my home where I churn out my stories.

Was there anything about Flipped for Murder which actually surprised you?
The voice came out lighter and funnier than some of my other books. And a couple of things happened to Robbie that I didn’t expect, including a second romantic interest hovering around the edges.

YES!  The potential of a second romance was a surprise.  Maddie, thank you for taking time to answer some questions for me.  Congratulations on Flipped for Murder.
You are most welcome. Thanks for some great questions! I’m excited for this new series and hope your readers enjoy Flipped for Murder.

You can read my review of Flipped for Murder here.

You can follow the Flipped for Murder Blog Tour here. 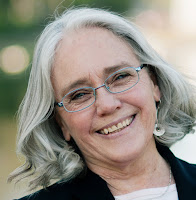 a Rafflecopter giveaway Follow
Posted by Kim at 3:39 AM