CHANCE OF A LIFETIME by Marissa Clarke ~ Interview & Giveaway 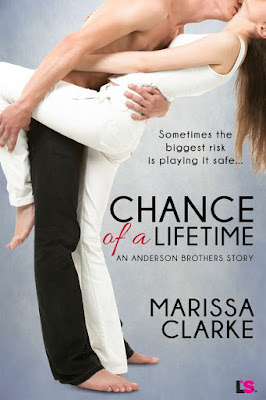 Sometimes the biggest risk is playing it safe…
Gen Richards is tired of living down to her family’s expectation of the helpless blind girl. Resurrecting her high-school bucket list that begins with “kiss a total stranger” seems just the thing until she finds herself in a panty-melting lip lock with her big brother’s best friend.
Chance Anderson thrives on adrenaline, but Genny’s the one risk he’s not willing to take. His recklessness a decade ago landed her in the hospital and ejected him from her life. He’s bad for her and everyone knows it—especially her big brother.
Chance reluctantly helps Gen complete her bucket list in order to keep her out of trouble. Running through a freezing fountain, playing Spin the Bottle while fending off a mad horde of stinging insects, and skinny dipping with homicidal attack swans don’t hold a candle to the real danger: falling for the one person he can never have.

He pulled her free of the fence and held her against him until she was steady. “Pond is about fifty feet straight ahead,” he whispered in her ear, sending shocks of energy through her entire body. “Are you sure you want to go through with this?”

She crept along behind him with her fingers through his belt loops, fighting back giggles. “Are you kidding? I’ve waited ten years to do this. Are you going to chicken out on me?”

“Shhhhhh.” He chuckled and stopped, causing her to bump into him full-body from behind with an oof. “What the heck?” she whispered. “It’s like the blind leading the blind here.”

“I’m going to show you precisely how well I can see if you mash your breasts against me again.” He headed off once more with her in tow.

“Well, then, warn me before you stop.” A rustling came from somewhere on the right. “What was that?” she whispered, moving her grip to the belt loops nearest the front of his pants to get closer to him.

“Stopping,” he said, straightening from his tiptoe crouch.

Still holding him tight, she buried her face in the back of his shirt. “There’s something in the bushes or weeds to our right, and I’m scared it’s going to jump out at us.”

He cleared his throat. “Honey, there’s something in my pants, and if you don’t turn loose of where you’re holding me, it might jump out at us, too.”

“Oh.” She giggled and released him. “Sorry. I’m kind of excited.”

Hi Marissa!!! Welcome Read Your Writes Book Reviews.  How are you? Are you enjoying the Texas weather?
Hi, Kim! Thanks for having me on your blog. I’m doing great, thanks for asking, and the weather is spectacular. Lows in the 50’s and highs in the 70’s. Heaven.

Your latest book, Chance of a Lifetime is the third and final book in your Anderson Brothers series.  You wrote the book in I believe less than two months.  What was that like?
It was a blast. I spent more time researching than writing, but once I’d completed the research, the story just flowed. I wish all my projects came this freely.

Tell me about Chance Anderson and Gen Richards.  I know the two have some sort of history.
I don’t want to give too much away, but this book contains my favorite trope: friends to lovers. These two grew up together and have a long history with several skeletons in the closet.

Since characters with disabilities are rare, how did you decide to write a blind character?
It wasn’t a conscious decision. The character just revealed herself to be blind—that sounds odd, probably, but I’ll try to explain.

My father lost his eyesight when I was in my teens, so I had some experience with it. More recently, I was visiting my daughter in NYC and a guy with a red and white cane blew by us, tapping his way through Times Square and it was amazing. Watching this capable man, I realized blindness doesn’t always manifest like it had in my dad—like a sighted person wearing a blindfold, fumbling his way around, terrified. Sometimes, it is simply part of someone, who if adaptive and brave enough, can forge through a sea of people effortlessly.

So, when I was creating this feisty heroine, Gen, who wanted to break free of her overprotective family, a lot of pieces fell into place when she revealed herself to be blind as she courageously forged her own path.

What can readers expect, when they pick up Chance of a Lifetime?  I love the title by the way.
A fun, romantic, heart-felt read. Pure escapism. And I’m glad you love the title. I do too!

Honestly, even though it deals with some heavier moments than the previous books, Chance of a Lifetime was the easiest (not sure that is the correct word, but hey…) to write for several reasons: The world and characters were already developed and I’d had a long time to think about Chance and Genny. Something in me connected strongly with Genny. She’s not like me at all, but I understand her place of hurt, which made the book flow more easily.

I have to ask...Who's your favorite Anderson brother and why?
Gah! I love them all for different reasons. Will is so sincere, Michael reminds me of someone I am very close to, and Chance is the man we all want (or want to be). It’s a three-way tie. Plus, they’d be really pissed at me if I picked a favorite.

Now, I'm sure you already know this, but you recently made me a very happy girl.  Can you tell everyone what you're currently working on and how it's going?
I’m working on the second book in the Underveil Series (Paranormal romance). The first one, Love Me to Death, might by my favorite book I’ve written.

I’m also writing a paranormal shifter romance for young adults called Hiding from Me. I’m excited about this one for so many reasons, not the least of which is the amazing songs from Entangled Music associated with the project. Wait until you hear the song by the same title. Eeep!

Marissa, thank you so much for taking the time to answer some questions for me.  I also want to give a BIG shout out to Chris Karper Smith with helping me with some questions.  Thank you so much Chris!
Thanks, Kim, for the interview and for all you do for authors and readers. And thank you to all readers and bloggers who support and cheer authors on. You guys make every book possible.

The Anderson Brothers Series:
(Click on the book covers for more information or to purchase from Amazon.)

Have a look at the Chance of a Lifetime book trailer.

Discover the Anderson Brothers Series by having a look at the trailer for the series.

Follow the Chance of a Lifetime Blog Tour here.

Marissa Clarke lives in Texas, where everything is bigger, especially the mosquitoes.

When not writing, she wrangles her rowdy pack of three teens, husband, and a Cairn Terrier named Annabel, who rules the house (and Marissa's heart) with an iron paw.

Currently, she serves as Vice-President of Programming for the West Houston RWA Chapter, and is a founding member of Houston YA/MG Writers, and the QueryTracker.net Blog.

She loves to connect with readers, so follow/friend her on Facebook and, or shoot her an email from her "Contact" page.

Marissa also writes young adult novels for Penguin USA under the name Mary Lindsey. She is represented by Kevan Lyon of the Marsal Lyon Literary Agency.

a Rafflecopter giveaway Follow
Posted by Kim at 4:50 AM