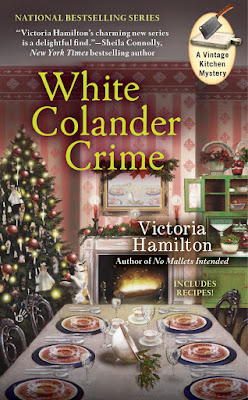 
In the new Vintage Kitchen Mystery from the author of No Mallets Intended, the Heritage Society is re-creating a perfect Victorian Christmas—until good tidings go bad...
Queensville has great expectations for their Dickens Days festival. A tourist-trade boom means a big turnout for the opening of Queensville Historic Manor and for Jaymie Leighton, food columnist and vintage cookware collector, a chance to promote the manor and give away homemade goodies.  At the end of a long day of festival fun, Jaymie discovers the battered body of local woman Shelby Fretter.

Shelby predicted her own murder in journal entries—and all clues point to Cody Wainwright, the troubled son of Jaymie’s beleaguered newspaper editor. But considering the entire Fretter family had its share of dirty secrets, Jaymie’s not convinced  by the case against Cody. With twists all over, she’s going to have to work like the Dickens to wrap up this investigation before Christmas—especially with the real killer ready to kill again.
INCLUDES RECIPES!
REVIEW
I’ve been waiting patiently for White Colander Crime, the fifth book in Victoria Hamilton’s Vintage Kitchen Mystery series.  The story picks up several weeks after No Mallets Intended, but can be read as a standalone.

Jaymie Leighton is coming to terms with the end of two failed relationships and embracing the start of a new one.  The Dickens Day Festival is about to start, the Queensville Historic Manor is about to open, and Christmas is just around the corner. To say it’s a busy time for Jaymie is an understatement.

Things get busier and more complicated when Jaymie discovers the body of Shelby Fretter.  Police suspect Shelby’s boyfriend, Cody Wainwright, beat her to death.  Cody is the son of Nan Goodenough, editor of the Wolverhampton Weekly Howler and Jaymie’s boss.  Nan asks Jaymie to look into Shelby’s death and is sure Cody didn’t commit it.

Jaymie’s investigation uncovers more than she bargained for.  At some point, she’s going to have to decide what side of the law she’s actually on.  Without giving away any details of the book, Victoria Hamilton has thrown in some twists and turns that will have you guessing until the end.  I’m glad to say the romance reader in me was very happy.  While I enjoyed White Colander Crime, the fact the victim died as a result of a beating did take some of my enjoyment away.  The Vintage Kitchen Mystery series is one of my favorite series and I’m looking forward to seeing what happens to Jaymie next.

**Received a copy from Penguin in exchange for an honest unbiased opinion.**

A Vintage Kitchen Mystery Series:
(Click on the book covers for more information or to purchase from Amazon.)

Jaymie Leighton stopped by to tell us what Christmas is like at her house.  There’s also a giveaway for a chance to win a paperback copy of No Mallets Intended and White Colander Crime.  You read the post & enter here.