Review ~ EVERYTHING I LEFT UNSAID by M. O'Keefe 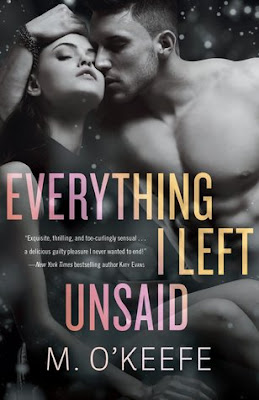 
Fans of Jodi Ellen Malpas, K. Bromberg, and Joanna Wylde will be unable to resist this sexy, deeply intimate tale of a woman running from her past, and the darkly mysterious man who sets her free.
I didn’t think answering someone else’s cellphone would change my life. But the stranger with the low, deep voice on the other end of the line tempted me, awakened my body, set me on fire. He was looking for someone else. Instead he found me.
And I found a hot, secret world where I felt alive for the first time.
His name was Dylan, and, strangely, he made me feel safe. Desired. Compelled. Every dark thing he asked me to do, I did. Without question. I longed to meet him, but we were both keeping secrets. And mine were dangerous. If I took the first step, if I got closer to Dylan—emotionally, physically—then I wouldn’t be hiding anymore. I would be exposed, with nothing left to surrender but the truth. And my truth could hurt us both.
REVIEW
Everything I Left Unsaid has been out for awhile now and I purposely made a conscious effort not to see what people were saying about it.

Dylan Daniels is a twenty-nine-year-old grouchy, grumpy hermit.  He has his own reasons for being the way he is, but he still manages to have a caring heart for those people in his life he feels deserves it.  Dylan is a man full of secrets and when those secrets are exposed, they are surprising and heartbreaking.

Annie and Dylan’s lives converge when Annie picks up a ringing cell phone belonging to someone else.  She’s drawn to Dylan’s voice and this initial phone call is the start of Annie’s self-discovery.

Everything I Left Unsaid is one of those books that is tricky to talk about.  I don’t want to give too much away, because part of not knowing what was going on was part of the intrigue to me.  Annie is married and sleeps with another man.  On the surface it’s wrong, but when you look at her life I can't fault her.  With Dylan’s help, Annie is pulled out of the so called “safe world” she’s been in.  This book is about an awakening for both Annie and Dylan.  The book ends in a cliffhanger, with a moment I feared would happen.  There’s no question I have to see how the story of Annie McKay and Dylan Daniels will end.

**Received a copy from Random House in exchange for an honest unbiased opinion.**

Purchase Everything I Left Unsaid from:
Amazon | Barnes & Noble | Goodreads