Review ~ IN THE WANING LIGHT by Loreth Anne White 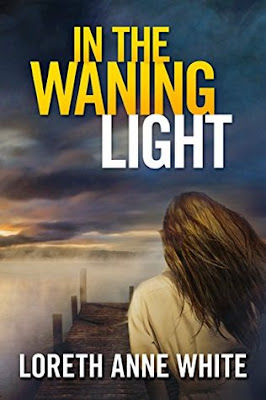 
Two decades after her sister’s brutal attack and murder, Meg Brogan has finally found happiness…or so it appears. A bestselling true-crime writer, Meg has money, fame, and a wealthy fiancé. But when a television-show host presses her to tackle the one story everyone claims she cannot write—the story of her own family’s destruction—her perfect life shatters.

Determined to finally face her past, Meg returns to her hometown of Shelter Bay. Shrouded in cold, brooding fog, the close-knit coastal town harbors dark secrets and suspicious residents. One of the few people to welcome Meg back is Blake Sutton, her high-school sweetheart and the marina’s new owner. Desperate for clues, Meg digs through her family’s files. As Pacific storms brew outside, her passion for Blake reignites.

But someone doesn’t want Meg digging up the past. And that person will go to deadly lengths to prevent the writer from revealing a terrible truth.

REVIEW
In the Waning Light is a romantic suspense/thriller that will keep you guessing until the very end.  Everything that can possibly happen, does.  On the surface, it is about a murder that took place 22 years ago.  In reality, the real story is about everything that happens before and after the murder that really counts.  Megan “Meggie” Brogan is a true crime writer that has yet to face the demons that haunt her regarding the death of her older sister, Sherry.  Sherry was raped and murdered and Meg was found unconscious.  Meg has never been able to remember exactly what happened nor has she made any attempt to write about it until now.  In order to slay her demons and win back her fiancé, she heads back to her hometown on the coast of Oregon and attempts to write a book about her sister’s murder.

The moment Meg enters town, everyone becomes on edge.  Meg quickly finds out that everyone has been holding some sort of secret.  There is an extensive cast of untrustworthy characters to choose from.  Most of them were not very likeable and if it wasn’t for Meg and the search for the truth, I don’t think I would have been compelled to finish it.  However, I had to understand how all of the secrets fit together and united the town or tore them apart.  Meg’s parents both died as a result of the tragedy that befell her sister.  In addition, many of the people she thought she could trust were complicit in Sherry’s death.  Meg is assisted in the investigation by her former childhood boyfriend but he has his own skeletons.  Speaking of skeletons, Sherry’s death eventually leads to several other deaths which I did not see coming.

In the Waning Light is the second book I have read by Loreth Anne White.  She isn’t afraid to tackle rape and murder head on.  Loreth Anne is able to capture the evil within everyone and shine a light on how fragile relationships can be when everyone is keeping secrets.  Although I did enjoy the book, it does tend to be very dark and morbid especially when a child is also put in danger.