An Interview with Ellie Alexander, author of ON THIN ICING 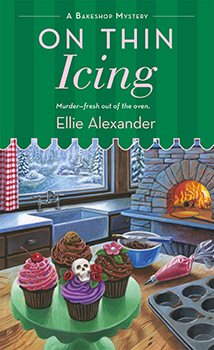 Welcome to Torte-a small-town family bakeshop where the treats are killer good.

It's the dead of winter in the sleepy town of Ashland, which means no tourists-and fewer customers-for Jules Capshaw and her bakery. But when she's asked to cater an off-season retreat for the directors of the Oregon Shakespeare Festival, business starts heating up...until Jules finds a dead body in the freezer.

"An intriguing new series."-Reader to Reader

Someone at the retreat has apparently iced the bartender, a well-known flirt with a legendary temper-that is, before a killer beat him to the punch. Then, from out of nowhere, Jules's own ex-husband shows up at the shop-and soon becomes a suspect. With accusations piling up higher than the snow-and thicker than a chocolate mousse cake-Jules has to think outside the (recipe) box to find the real culprit...and make sure he gets his just desserts.

"A delectable tale of murder and intrigue."-Portland Book Review on Meet Your Baker

Hi Ellie.  Welcome to Read Your Writes Book Reviews.  How are you?
Thanks so much for having me! At the moment I’m writing this from my dining room table in front of a crackling fire and looking out onto my frosted backyard. I feel like I’ve stepped into the pages of On Thin Icing.

That’s a very lovely image.  You're a new to me author.  I haven't read the Bakeshop Mystery series before, but it looks really good.  Tell me about your protagonist, Juliet Capshaw.
Juliet Montague Capshaw (but please call her Jules) has returned home to Ashland to heal a broken heart after spending the last ten years working as a pastry chef on a cruise ship. She left the charm and comfort of her hometown after graduating from high school to attend culinary school in New York, and once she landed her first job on the cruise ship she set sail for distant ports and far off corners of the globe. She loved her childhood in Ashland, but longed to see the world. Her time on the ship helped hone her innate culinary talents and allowed her to experience tastes and flavor combinations from Italian tiramisu to Turkish baklava. Pastry is an art form to her and an expression of love.

Tell me about Ashland, Oregon and the people who live there?  Is it based off a real town?
Ashland, Oregon is indeed a real place. It’s located in the southern most corner of the state near the border with California and is surrounded by the Cascade and Siskiyou Mountains, rivers, lakes, and forests. Not only is it an adventure-lovers paradise but it’s also home to the Oregon Shakespeare Festival. The Festival attracts tourists from all over the world who come for its award winning plays and to watch Shakespeare under the star in the outdoor Elizabethan theater. Walking through Ashland’s downtown plaza feels like stepping back in time. Many of the shops and restaurants are themed after Shakespeare and designed in old-English style. It’s the perfect setting for a cozy mystery.

That sounds amazing.  I'm a romance girl at heart.  I love that cozy mysteries gives me a little mystery to solve and a little romance.  Tell me about Juliet's love interest.
Jules has left her husband, Carlos, on the ship and come home to help her mom run their family bakeshop, Torte, while she mends her broken heart. She’s definitely a romantic, and blames that on her name. After all she was named after Shakespeare’s most romantic heroine. In the first book we don’t know why Jules has left Carlos, and we only learn about him through her thoughts and memories. She’s torn. She obviously loves her husband, but he’s hurt her. She embraces the warm and welcoming community of Ashland and throws herself into baking. To complicate matters her high school boyfriend, Thomas, is the town’s deputy in training and is still harboring feelings for Jules.

A triangle, love it.  What's your writing style like?  Do you start out with an idea of how the person is going to die and then figure out who dies and why? Or do you just somehow let the story play out?
Usually I start with the actual murder and then work my way backwards. Once I have a clear idea of who the victim is and why harm has come to them then I begin to sketch out who all of the possible suspects could be. I map out each suspect and what they are lying about or hiding. That way everyone has a reason to acting strangely which hopefully takes readers down the wrong trail. As a reader myself, I love puzzling through the clues to figure out who the killer is. My goal as a writer is to keep you guessing and turning the page.

What's the most difficult part about writing a cozy mystery?  And what's the best part?
I think the initial planning and sketching is probably the most difficult part of writing mysteries. I really enjoy the process, but it takes time and careful thought. I always do all of my plotting work in pencil so that I can erase and make changes as the suspects and victim begin to develop. In terms of the best part, writing the words “the end”!

When and where do you write?
I write a minimum of two thousand words every day. I write in the morning from my home office. Once I hit my word count for the day, I get outside and take a long walk because I find that some of the best ideas evolve when I’m not actually sitting in front of my laptop. I also spend a lot of time working on recipes in my home kitchen.

The latest book in the series is On Thin Icing what can you tell me about it?
I’m so excited about this next installment. Jules has been asked to cater a retreat for the Oregon Shakespeare Festival at a high alpine lodge, Lake of the Woods. She’s looking forward to a snowy weekend cooking in the lodge’s vintage kitchen and in its wood-fired pizza oven, but then a blizzard strikes cutting off power and snowing Jules in with a killer. She’s stranded at 5,000 feet, trying to cook in a dark and cold kitchen, and having to track down a killer in the deep snow, all while juggling two men trying to woo her—her husband and Thomas, who both arrive on the scene.

Was there anything about On Thin Icing which actually surprised you?
Carlos! Jules’s estranged husband, Carlos, shows up unexpectedly at Lake of the Woods. I knew from book one that Carlos would be coming, but I’ve never had a character take over the way that he did. He’s a Spanish chef and his love for food comes through in everything that he touches. He’s also on a singular mission to win Jules back. Things really start to heat up in the kitchen with Carlos, and Jules while is dazzled by his attempts to rekindle their romance she’s also distracted and confused about what she wants. When I was working on this book I felt as conflicted as Jules. It was great to finally have Carlos appear as a real character on the page, but I couldn’t get him to stop with his sultry Latin cooking and romantic moves.

I happen to have in my little hands On Thin Icing, thank you!!!!  Recipes, oh my gosh.  How do you come up with the recipes to include in your books?
I love to bake. Sometimes I have to pinch myself that I get to combine two things that are passions of mine—mysteries and baking. All of the recipes in the books are original recipes that I’ve created or have been passed on from my family. Food is such an expression of love in my opinion and I’m thrilled that I get to share that with my readers. Usually the recipes evolve with the story, as Jules is working in the bakeshop it will spark a food memory for me and I’ll jot down an idea to test later in my kitchen. It’s pretty organic. The act of baking helps me get in Jules’s head and lends layers to the story. For On Thin Icing, I worked on a lot of winter recipes and bakes since it's set in the middle of a blizzard. The funny thing was that I was writing that book in the middle of a heat wave so it felt strange to be baking hearty roasts, soups, and cakes. I would blast the air conditioning and try to imagine that my fingers were freezing as I tested each recipe.

I understand about cooking winter (comfort) foods in the middle of summer.  It’s just not right to have a nice pot roast, when it’s 85 degrees outside.  Ellie, thank you for taking the time to answer some questions for me.  Congratulations on On Thin Icing.
Thank you so much for having me. Happy reading and baking!