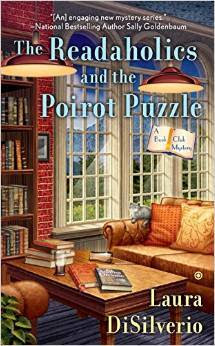 Agatha Christie is on the book club’s reading list in the latest from the author of The Readaholics and the Falcon Fiasco. This time, Amy-Faye and her friends might have to read between the lines to catch a killer.

Amy-Faye Johnson’s book club, the Readaholics, is engrossed in Murder on the Orient Express, and Poirot’s surprising resolution is stirring up debate. Is the solution remotely realistic? Is justice served by Poirot's decision? Well, the book is fiction after all…

Then, just as Amy-Faye is planning the grand opening of her brother Derek’s pub, his hot-headed partner is murdered. To keep Derek from being railroaded as a suspect, Amy-Faye and the Readaholics take a page from Poirot and investigate. But as the clues lead to unlikely places, surprising motives, and a multitude of suspects, Amy-Faye and her pals wonder if truth can be just as strange as fiction.
REVIEW
In this installment of the Book Club Mystery series, the readaholics are reading Agatha Christie’s Murder on the Orient Express.  In the book and movie, Detective Hercule Poirot is tasked with finding out who killed Ratchett and why.  The storyline is full of conspiracies, with several people who had motive and opportunity to kill Ratchett.

Amy-Faye’s younger brother Derek is finally having his dream of opening his own brewery come true.  It’s the grand opening of Elysium Brewing and things aren’t really going according to plan.  Derek’s financial backer and business partner, Gordon Marsh is found dead.

It seems Gordon was very much lacking in the fan club department.  From employees to business partners to girlfriends to ex-wives and family, Gordon made enemies everywhere he went.  The question becomes who wanted Gordon dead and why.  When the police arrest Derek, Amy-Faye pulls out all the stops to prove his innocence.

Like Murder on the Orient Express, The Readaholics and the Poirot Puzzle had many suspects to choose from and many twists and turns.  Finding out exactly who the killer was and why was definitely a puzzle.  I loved attempting to put all the pieces together. With so many potential suspects, Laura DiSilverio had me guessing up until the big reveal.  Surprisingly, in the end, I found myself feeling sorry for the victim.  I know, usually the victim in a cozy mystery isn’t someone liked by people.  Don’t get me wrong, Gordon did have his bad qualities.  But Amy-Faye’s investigation uncovered something that was shocking.

I’m looking forward to the next book in the series to find out what Amy-Faye’s love life holds, the fallout from the events of The Readaholics and the Poirot Puzzle, and what other misadventures Amy-Faye finds herself involved in.

**Received a copy from Penguin NAL for an honest and unbiased opinion.**

Purchase The Readaholics and the Poirot Puzzle from:
Amazon | Barnes & Noble | Goodreads

The Book Club Mystery Series:
(Clicking the book covers will take you to Amazon.)

The Readaholics and the Falcon Fiasco ~ Review