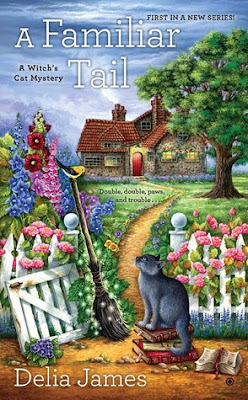 Magic and meows meet in the first enchanting Witch’s Cat mystery!
Unlucky-in-love artist Annabelle Britton decides that a visit to the seaside town of  Portsmouth, New Hampshire, is the perfect way to get over her problems. But when she stumbles upon a smoky gray cat named Alastair, and follows him into a charming cottage, Annabelle finds herself in a whole spellbook full of trouble.
Suddenly saddled with a witch's wand and a furry familiar, Annabelle soon meets a friendly group of women who use their spells, charms, and potions to keep the people of Portsmouth safe. But despite their gifts, the witches can’t prevent every wicked deed in town....
Soon, the mystery surrounding Alistair’s former owner, who died under unusual circumstances, grows when another local turns up dead. Armed with magic, friends, and the charmed cat who adopted her more than the other way around, Annabelle sets out to paw through the evidence and uncover a killer.

Hi, Anna.  Welcome to Read Your Writes Book Reviews.  How does it feel to have your story, A Familiar Tail, out in the world?
It's really exciting, and a little scary.  I've been in the broom closet (that's what Val and Kenisha call it) for so long, coming out as a witch has been a little nerve-wracking.
Do you think Delia, your creator, did a good job of telling your story?
Delia's a great writer, and Jess Wade has been a fantastic editor.  It's a treat to work with people who really understands the importance of coffee and cupcakes to the creative process.
Was there ever a time when you interrupted her writing thoughts to tell her you didn’t like something? And how did that work out for you?
Well, you know, in any collaboration there are times when you've got to put your foot down.  Like I said, Delia's a great writer, but we didn't always agree on what was really important to tell, and when it should be told, if you see what I mean.  Especially in the middle sections, we went back and forth a lot about when and how to tell what really happened.  I won't say we actually argued or anything like that, but we did have a few really tense discussions, and I may have stopped talking to her for a week or so in there somewhere.
You might have heard that I LOVED your story.  Without giving anything away, what was your favorite part of A Familiar Tail?
First of all, thanks so much.  For me, finally being able to talk about my magical heritage has been huge.  As you know, that's been a big, and kind of confusing, secret in my life until now.  And then there's meeting Alistair.  That's been a story in and of itself.
Are you getting use to living in a magical town and having a cat who loves to appear and disappear unexpectedly?
Alistair's a great cat and our relationship has witch and familiar has given a whole new dimension to my life. I wouldn't trade it for anything.  But he's still a cat, which means he's got his own ideas about how things should be run and just who is in charge here. And there was this little thing with the catnip...Well, let's just say that you should definitely not give 'nip to a cat with Cheshire heritage...
I know you’re just getting over a bad relationship, sorry to bring it up. However, I was wondering if you happened to have your eyes on anyone?
No.  Definitely not.  I am done with guys and dating and the whole thing.  I don't know how many times I'm going to have to explain this to Val and Kenisha, and Martine, but it is true.  I mean, Sean's a nice guy and he's cute and all, but...no.  After the thing with Truman and the Vegas blonde, just, no.
I’m super happy to report you have another book coming out later this year.  By Familiar Means is out this September.  What are you looking forward to with that story?
My Grandma B.B.'s coming to stay, so I'm really looking forward to that.  Don't tell anybody, but I'm kind of hoping we'll be able to patch things up between her and Julia.
Before we part ways, was there anything you wanted to say to readers?
Just that I hope you enjoy the book and if you do, be sure to leave a review at your favorite online site so we can spread the word about the series.
Well, Ms. Annabelle Amelia Blessingsound Britton (sorry, I happen to like your name) it was a pleasure chatting with you.  Feel free to stop by anytime, or have Delia stop by.
Thanks again.  It's been great.  I'm always glad to have the chance to introduce the familiars and their stories to readers.  And I'll let Delia know, although she might not have time for a bit.  She's hard at work on our third story.

The Witch’s Cat Mystery Series:
(Clicking on the book covers will take you to Amazon.)

Delia James has been a writer almost as long as she’s been anything.  She started putting stories on paper by drawing stick figures comics based on Maurice Sendak cartoons and never stopped.  These days, she writes her magical mysteries from her home near Ann Arbor, Michigan, assisted by her loving husband, Tim, her magnificent son, Alex, and her vocal cat, Buffy the Vermin Slayer.