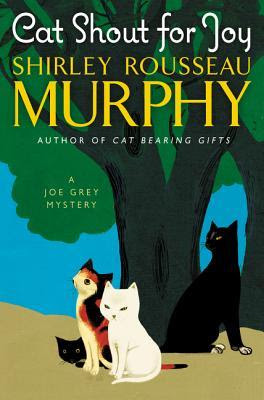 Awaiting the birth of his first kittens, feline P. I. Joe Grey, his companion Dulcie, and their furry sleuthing pals must unmask a killer preying on some of the most vulnerable citizens in the charming California coastal community of Molena Point.

For Joe Grey and Dulcie, life is a bittersweet mix of endings and beginnings. While they joyfully await their first litter, they are also sad for their friend, the old yellow cat Misto, whose time on earth is drawing to an end. But Misto tells them an exciting future awaits: among the litter will be a little calico returned from the distant past who will be born with the same ancient markings, and the adventurous spirit of Joe Grey.

While the proud parents await the birth of their babies, their humans have their hands full with projects of their own. Kate Osborne has bought the old Pamillon estate and Ryan Flannery is building a new cat shelter as part of their volunteer rescue project. The criminals are busy, too. The Molena Point PD has stepped up patrols to apprehend a mugger attacking the local elderly. The case becomes a homicide when one of the victims dies, leaving everyone in the town—including Joe Grey and his furry sleuthing companions—on edge, just when the kittens are about to arrive. When Dulcie gives birth, her little calico is just as Misto predicted, as if she has come back to the world from mythic ancient times.

But the celebrations will have to wait. A murderer is on the loose—and neither young nor old is safe until the culprit is found.

REVIEW
Molena Point, California has had an increase in attacks.  What makes these attacks interesting is that the victims are all elderly.  They are attacked when they are alone, at different times of the day.  The attacks involve being hit on the head and pushed down.  There’s no robbery and the perpetrator seemingly disappears.  Unfortunately, several of the attacks have lead to the victims’ deaths.  Police are at a loss as to what’s going on and why.  It’s time for Joe Grey and his cat friends to get involved.

Cat Shout for Joy is the 19th book in the Joe Grey Mystery series.  However, it is the first book I’ve read.  For the most part, I found the story to be a standalone read.  I did, however, find myself being a little confused and intrigued by the magical cats (Misto, Joe Grey, Dulcie, Pan, and Kit).  It took me awhile to understand where they came from and what their abilities were.  To say I was completely fascinated with them would be an understatement.  Each cat has their own personality and demeanor, making them all individuals.  They all have a need to investigate and love their humans madly.

I liked the plot and storyline.  I found the mystery to be good with a couple of misdirects thrown in.  I’m not sure I can say I liked the way the mystery was resolved, but I can say justice was served.  Cat Shout for Joy balanced the death of wise and charming Misto well with the birth of Joe Grey and Dulcie’s kittens.  While Misto dying is sad, he was happy, comfortable, and ready to move on to a new world/adventure.  For me, that in and of itself made his passing less sad.

Cat Shout for Joy marks my first time reading about an animal doing any type of investigation.  It’s different from the normal cozy mysteries I read.  I loved that the cats could talk, read, and knew how to do normal human things.  I looking forward to reading more books like this.

**Received a copy of the book courtesy of William Morrow for an honest and unbiased opinion.**

The Joe Grey Series:
(Click on the book covers for more information and/or to purchase from Amazon.)