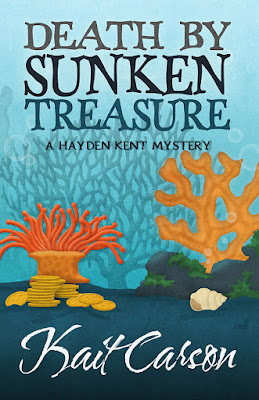 When Hayden Kent’s mentor and friend discovers her son Mike’s dead body, dressed in full scuba attire, washed up on Pigeon Key, she needs Hayden. Her paralegal and dive skills may help unravel the tragedy of Mike’s last days. He’d recently discovered a sunken Spanish galleon and rumors that he hit the mother lode ran through the Keys like wildfire.

Hayden’s dive on the treasure site uncovers gold, and clues that Mike’s death was something far more sinister than an accident. When two different wills, both signed the day Mike died, are delivered to the courthouse, the suspect list grows, as do the threats against her. The danger escalates as she tries to save herself, discover the motive, and find the killer.

Hi Kait.  Welcome to Read Your Writes Book Reviews.  How are you?
Doing great. Thank you so much for inviting me. I love your blog title.  It has a great appeal for me.

Thank you very much.  How do you write your books?  Do you start with the beginning, middle or end or do you write down scenes and then try to figure out how to put them all together?
Hard question! I’m a plotster. So far, death has opened the door for my creativity. To quote a line from a movie, “I see dead bodies.” They can show up any place. In Death by Blue Water, a plastic bag floated out of wreck at 120’. That bag turned into the waving hand of a corpse. In Death by Sunken Treasure, I was taking pictures of Pigeon Key in Marathon from the old Seven Mile Bridge. Something caught my eye under the crossbars of the old auto ramp to the Key. That became a dead scuba diver washed ashore. Once I have the victim firmly visualized, I work out the scene where my heroine discovers the death. From there, I work backwards to the start of the book. Then I make rough outlines for the protagonist, the victim, the primary storyline, the secondary storyline, and the red herrings from the discovery of the body to the conclusion of the book. That’s where I’ll write scenes that capture me at the moment and figure out where they go later.

How do you handle writer’s block?
I write, by hand. It doesn’t matter what I’m writing, sometimes it’s been, “Why did I start this book?” over and over and over again. I do it until something dribbles into my mind, then I’m off to the keyboard.

Tell me about your protagonist, Hayden Kent.
Hayden is a 30 something paralegal who works for an attorney in the Florida Keys. She’s also a Conch—native-born child of the Keys with roots going back several generations. Conchs look at things differently than most folks in the Keys. They’re practical, no-nonsense types, and they are survivors. They live in a place where a bad day is your Island going under ten feet of water while it’s being buffeted by 150 mph winds.  She has all those traits, but she’s also whimsical, an animal lover, and very vulnerable. Her emotions run deep and she tries to protect herself in the clinches.

Do you think some of your character traits are found in Hayden, and if so, what are those?
No. I think Hayden is more who I would want for a best friend. Odd as it sounds, I ask her advice from time to time. She’s much stronger than I am.

How much of your background has played a part in writing your series?
Quite a bit actually. There may be something to Hemmingway’s write what you know about quote. Hayden and I share a profession and a love of SCUBA diving. My background lets me write her with confidence, but we have very different adventures.

Every author has a favorite scene from a book.  If you can, can you tell us about your favorite scene from Death by Sunken Treasure, without giving anything away?
There’s a scene where Hayden confronts an attorney named Buddy Smith. Buddy has filed a competing Last Will and Testament in the Court to the one Hayden’s boss filed and she’s trying to find out which Will is the effective one. The dialogue takes on a who’s on first hilarity with Hayden asking questions and Buddy responding to what he wants to hear. He is peeved that he’s talking to a paralegal and not her boss so he’s not willing to make anything easy for her. It’s also the scene where Hayden gets her first clue, but doesn’t recognize it yet. I chuckle every time I read it.

What do you think Hayden would think of you as her creator?
I think she would admire my professional skill but scoff at my diving skill. Hayden is an instructor, and I a lowly advanced diver. She makes me do lots of research. I have DAN (Diver’s Alert Network) on speed dial. I’m pretty sure she would agree with me though, that we made a bad tradeoff at birth when we gave up gills for lungs!

Thank you Kait for taking the time with talk me.
Thank you for having me, Kim. This has been a wonderful time. Your questions were probing and I think my readers will have a better understanding of Hayden because of them. I hope you will have me back to talk about Hayden’s next adventure, Death Dive.

Thank you so much.  You are welcome back anytime.

The Hayden Kent Mystery Series:
(Clicking on the book cover will take you to Amazon for more information or to purchase.) 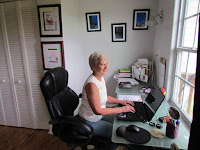 Kait Carson spent a lifetime living and working in the tropical paradise of south Florida. She opted for a day job as a paralegal practicing in the world of high-end estates and probate litigation. Legal pads give way to a keyboard in the evening and Kait spins tales of murder and mayhem set in the steamy Florida heat. Like her protagonist, Hayden Kent, Kait is an accomplished SCUBA diver. She lives with her husband, six rescue cats and three tropical birds at an airpark in Florida. Not too far from the water.