PROMISE ME THE STARS by Norah Wilson (Spotlight) 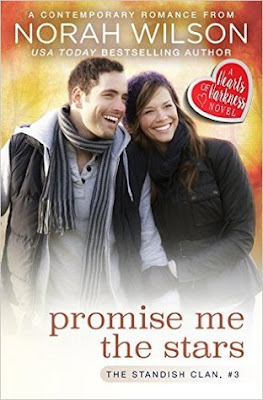 Scott Standish has been a rambling man since his mother got sick way back when he was eighteen. Unable to watch her die, he left home after graduation and kept roaming.

But when he goes home to Harkness, New Brunswick for a Thanksgiving visit, he discovers he’s got a stowaway—ten-year-old Sid the Kid, his sidekick from the job he just left. For once, moving on had been hard, and not just because of Sid. The attraction between him and Sid’s mother, chef April Morgan, is electric. But she’s a single mom needing stability, and he plans to keep moving.

When April comes to Harkness to retrieve Sid, she does so in a car packed with all her worldly possessions, having been fired from her position over her daughter’s behavior. When Scott realizes her predicament, he offers her domestic employment.

With no place to go and no one to turn to, April and Sidney make a home at the Standish farm. Her daughter is thrilled, rapidly becoming attached to the dog and the family despite April’s reminders that it’s only temporary. Scott Standish might be tied to the farm for a few months, but she knows he’ll settle nowhere, least of all in Harkness. April can’t afford to take a chance with her heart, or her daughter’s. So she has no choice but to fight the yearning that grows stronger inside her every day.

“Sid, do me a favor?” Scott said.
“What?”
“There are a couple more paintbrushes—yellow-handled ones—in the storage shed. I was thinking they might work better on those shingles. Think you could go ask Uncle Arden to help you find them?”
“Sure.” She started to bolt again but stopped herself. She turned to her mom, her face serious. “I really am sorry, Mom.”
April nodded. “I know.”
As soon as Sid was out of earshot, April turned to Scott. “Yellow-handled ones, huh? That makes a difference?”
“Thought we could talk.”
“So you sent her on a wild goose chase?”
He shrugged. “They’re really there, stashed away somewhere. But when Sidney goes in and tells Uncle Arden I sent her looking and that you’ve arrived…”
“Ah, a delay tactic. He’ll know not to find them too quickly.”
“Yes.”
April smiled weakly. “I’ve been so worried. I was scared she’d try to run again, and not knowing the area…I’ve been imagining the worst.”
“We’ve kept a good eye on her. Dad’s in the kitchen, and then there’s her shadow.” He nodded toward the back step where a tail-wagging Axl got up and followed Sidney into the house. “He keeps an even closer watch than we do.”
“She’s always loved dogs.”
“Maybe they’ll let her have one wherever you’re going?”
“Where we’re going? What makes you think we’re going anywhere?”
Scott put his hand on the hood of the Hyundai. “I know this isn’t just packed for a road trip.”
She bit her lip, glanced toward the house. “Can we talk someplace more private?”
“There,” he said. “The Far South Barn.” He led her across the grass to the outbuilding. Skirting the pile of painting supplies he’d just deposited, he opened the door for her. She preceded him in, then stopped.
“Give it a minute and your eyes will adjust.” He stepped in behind her and closed the door.
It was a bright day outside, but the well-maintained barn had very little light coming in. High windows allowed a few streams of it to fall down into the room. The loft was a different story. Though those wide doors were closed now, on more than a few mornings he’d watched the sunrise from there.
“What a beautiful old building.”
He murmured an agreement, but couldn’t take his eyes off her face as she looked around. She seemed to be drinking the place in. The soft lighting, the smells, the motes of dust dancing in the focused streams of sunlight
“Lots of memories here, I bet.” With a soft smile on her lips, she turned her face up to him.
Memories? Yeah, the place was steeped in them.
And he was about to make another one.
He pulled her to him.
They’d agreed not to do this. Every time they’d fooled around, one or the other of them had pulled back, remembering why it was such a disastrous idea. But as with those other times, she went into his arms easily, eagerly. When he covered her mouth, she met his demand with a matching hunger.
Just like that, he was kissing her like there was no tomorrow.

April was drowning, but she didn’t care. She wrapped her arms around his neck and went up on tiptoe, the better to press her breasts against his lean strength. He groaned and pulled her hips closer. Another wave of desire washed over her when she felt his hardness against her belly, but she recklessly submersed herself in it.
Then he was moving her, backing her up. Within seconds, she found the small of her back bumping up against something. Before she could figure out what it was, he lifted her and deposited her onto a hard surface. A wooden sideboard or storage cabinet of some kind, she thought. He urged her legs apart and moved between them. With his hands now free, they roamed her body at will. From her hair to her nape. From her breasts to the outsides of her thighs. She gloried in every sensation. Then he lifted her T-shirt out of the way and bent to press a hot, open-mouthed kiss to the top of her left breast above the lacy cup of her bra.
For whatever reason—maybe the cool air on her midriff—she finally came to her senses.
She gripped his shoulders, pushing him away. “Stop.” She sucked in a shuddering breath. “Scott, we can’t…”
“Right.” He stepped back, turning away to adjust himself.
Oh, God, what was she thinking? As if her life wasn’t already complicated enough. He was a man who lived life on the road; she was a mother. She would not feel for him. Could not feel for him. It would be sheer stupidity. And so dangerous for Sidney’s heart. For her own.
April eased herself off the sideboard—it was definitely a sideboard, rustic and rough and probably built expressly for the parties held here—and smoothed her clothing. Well, best it could be smoothed after so many cramped hours in the car.
Scott pulled a deep breath and ran his hands through his hair.
“I’m sorry,” she said. “I shouldn’t have—”
“No, I’m sorry.” He waved off her apology. “You’re tired after that drive, emotional from the reunion. Unsettled, literally. I shouldn’t have kissed you.”
“I’m glad you did.” She forced a smile. “I know it doesn’t change things, but I can’t say I regret it.”
He smiled back at her. “Me either.”

The Standish Clan Series:
(Clicking the book covers will take you to Amazon.) 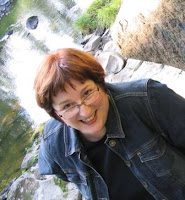 Norah is a three-time finalist in the Romance Writers of America's Golden Heart contest. In 2003, she won Dorchester Publishing's New Voice in Romance contest.

In addition to writing romance, Norah also writes in the mystery and YA genres with writing partner Heather Doherty. The mystery is the cozy variety, not the thriller variety (they dare you to read a Dix Dodd mystery and not laugh out loud).