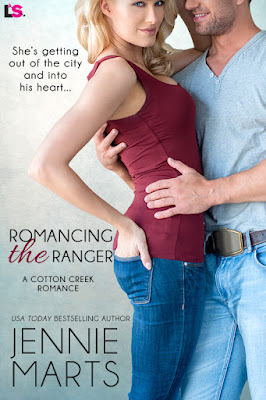 Reese Hudson meant to destroy mementos from her last failed relationship, not burn down an outhouse and incur the wrath of a sexy park ranger. When the judge rejects her offer to pay for the structure and sentences her to rebuild it—with the hot ranger supervising—she embraces the challenge to take control of her life.

Park ranger Wade Baker wants nothing to do with the rich city girl, no matter how tempting he finds her lush curves. She’s too much like his ex-fiancée, and if he’s learned anything, it’s that women like Reese don’t fit into his world. And he sure as hell wants no part of her big city life.

Reese may not know a hammer from a screwdriver, but she’s working hard to prove she’s not just some pampered princess to be toyed with. And damn it if Wade doesn’t admire her tenacious spirit. If only they got along half as well outside the bedroom as they do in it, there might be a chance for them after all…


REVIEW
Reese Hudson has had enough of her uptight, controlling boyfriend.  When he does the unthinkable, the financial advisor breaks up with him and decides to get rid of all mementos of the relationship.  However, in doing so, she accidentally sets fire to an outhouse.

Wade Baker loves his life, for the most part.  He loves being a Park Ranger, being near his grandmother, and living in the small town he grew up in.  What he doesn’t love are the monthly credit card statements he receives as a result of his ex-fiancee's various shopping sprees.  They serve as a reminder that he wasn’t enough for her. She saw his job as a ranger to be inadequate and the pay simply not enough to be able to afford the lifestyle she thought she deserved.

Reese and Wade meet in one of those “cute meet” ways.  Well, maybe not so cute. She comes close to burning down his forest.  Luckily, he was there to extinguish her out of control fire.  Being in the small town of Cotton Creek, Colorado, Reese is sentenced to an unconventional punishment.  She has to spend the next two weeks in town, rebuilding the outhouse she burned down and Wade is tasked with supervising the rebuild.

I liked the story of these two.  It was definitely cute and entertaining.  Reese was likeable from the start.  Yes, she’s a rich city girl, but money and status mean nothing to her.  She has a heart of gold and it’s always in the right place.  Sadly, I can’t say the same for Wade.  He had his moments when he was sweet and caring and you saw the good guy that he was.  But every single time things between him and Reese were going good or she unconsciously said or did anything relating to money he would always hold her bank account against her or berate himself for not having money.  This for me, got REALLY old, really fast.  Wade’s attitude took away from my enjoyment of the book.  I would have preferred if he simply acknowledged it to himself and her one time, been done with it, and simply enjoyed the budding relationship.

Romancing the Ranger marks my first time reading Jennie Marts and I’m curious to see where she takes this series next.