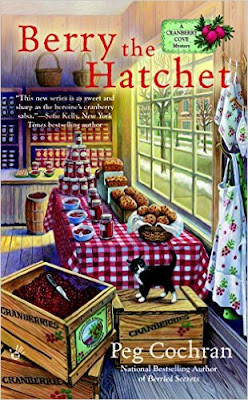 The entire town of Cranberry Cove is popping with excitement. Monica Albertson is baking cranberry goodies by the dozen and shopkeepers are decking out their storefronts for the first annual Winter Walk—an event dreamed up by the mayor to bring visitors to the town during a normally dead time of year.

But it’s the mayor who turns up dead during the grand opening ceremony, his lifeless body making its entrance in a horse-drawn sleigh. Monica’s mother and stepmother quickly become the prime suspects when it’s discovered that the mayor was dating both of them, and to make things worse, her half brother Jeff uncovers a clue buried near one of the bogs on Sassamanash Farm. Now it’s up to Monica to find out who really put the mayor on ice.
INCLUDES CRANBERRY RECIPES

REVIEW
It’s the dead of winter in Cranberry Cove, Michigan and new mayor Preston Crowley has come up with the idea of Winter Walk, to bring in more tourists and an influx of cash to the town.  All the stores along Beach Hollow Road are lit up with white lights and various booths are set up along the closed sidewalks.  Tourists and residents are all excited but not everything is going smoothly.  Only minutes before the Winter Walk is supposed to start, the mayor’s body is discovered.

Questions start to arise as to who would kill the mayor and why.  It seems the mayor wasn’t as honorable as he seemed, but how far does his transgressions go? During the investigation, it is discovered the esteemed mayor was not only dating Monica Albertson’s mother Nancy, but also her step-mother Gina.  Knowing the prime suspect is usually the significant other, Monica isn’t about to let either woman go down for a crime they didn’t commit.

Berry the Hatchet, the second book in Peg Cochran’s Cranberry Cove Mystery series can be read as a standalone and proves to be one very enjoyable and entertaining read.  The story holds quite a few surprises for Monica and readers.  I loved the mystery of trying to figure out who the mayor truly was and why someone would want him dead.  I have to admit, I definitely didn’t see the “why” coming. Nancy and Gina proved to be a very interesting pair.  I continue to love the characters in this series, who each prove to add a little information to help Monica along with her investigation.  I love that Detective Stevens shares information with Monica, but I have to wonder if she’s hoping Monica will solve the case for her.  I’m loving this series and I’m looking forward to more books.  However, I really hope the next murder victim isn’t another mayor of the town.  With two mayors killed in less than a six month time frame, I’m thinking at some point people will stop trying to run for office.

The Cranberry Cove Series:
(Clicking on the book covers will take you to Amazon.)