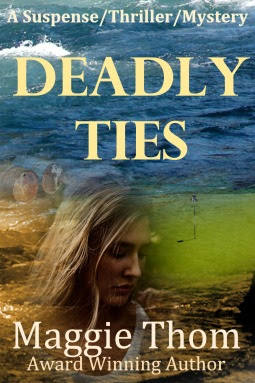 She went to jail for the right reason but the wrong murder.

With her mom in the hospital from a recent attack, Kyara has to wonder if her grandmother’s recent release from jail isn’t behind it. Pulled from her quiet, content life, Kyara finds herself on a mission, not only to find out who put her mom in a coma but who just might have a lifetime of secrets to hide.

Snooping into what’s going on, seems harmless until Kyara meets Ryan, and discovers who he really is. Unknowingly, they have stirred up a long forgotten past, one that some will go to any lengths to keep hidden.

Secrets spanning thirty years may never come to light unless they can solve the deadly secret, now buried beneath the golf course and stay ahead of those trying to kill them.

How many more people will die before the lies are unraveled and those who are guilty, decide that killing an entire town, isn’t too far to go to hide their dirty past?

REVIEW
Deadly Ties was a mystery/suspense for the ages, literally. It involves three generations of women in one family and how they have been affected by secrets and lies that all come to a head after the eldest woman gets out of prison. Those secrets involve murder, rape, and a golf course that’s at the center of it all. At first, none of it makes a lot of sense because it’s impossible to figure out where the story is going but that’s the point. Misdirection is the key to a good mystery. The fact that there is a large cast of characters makes it even more of a challenge to keep up with everything. That’s not to say that I didn’t enjoy it, I just had no clue who did what until it was all spelled out.

Maggie Thom does an excellent job of creating some truly shady characters. The Jesperson family that runs this small town of Camden is despicable. They are driven by greed and power. They don’t hesitate to kill and do it without remorse to hold onto to their status. Once someone threatens to reveal their most guarded secret, all hell breaks loose. The worse thing is that they are under siege by a grandmother of all people. The thought of an elderly woman seeking revenge is laughable until you actually watch it all play out. How could you not root for Grandma? There are so many details that I would love to share but it would ruin the mystery. Just sit back and enjoy the ride.

**Received a copy from the author in exchange for an honest and unbiased opinion.**