Review ~ Four Weddings and a Fiasco: The Wedding Secret by Jennifer Shirk 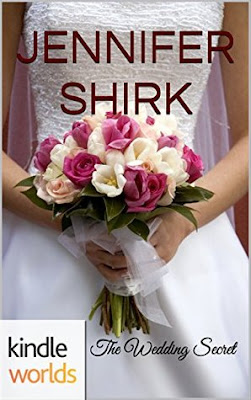 Ten years after a high school pregnancy left her abandoned by her family, single mother Brenna March is finally getting her life under control. In possession of her dream job as a florist at the Rose Chalet, one of the premier wedding spots in San Francisco, she's about to prove her worth and take on her first wedding as head florist. Unfortunately, the best man is none other than Senator Ashton Mirenda--her old high school sweetheart and the father of the daughter he knows nothing about.

Ashton doesn't have time for marriage or a family. He has other aspirations and the first is winning the next senate seat election. Or so he believes until he meets a woman from his past. Seeing Brenna again stirs something inside him he'd thought long dead, and he knows that he wants her beside him all the way to the White House.

But Brenna is holding a ten year old secret, one which could not only hurt his chance for re-election but also their chance to rekindle the love they once shared.

Ten years ago, an unplanned pregnancy left Brenna March heartbroken and with the exception of her aunt, all alone.  She’s worked hard to provide for herself and her daughter without any help from her daughter’s wealthy father.  Ashton Mirenda may have left the West Coast and moved to the East Coast to go to to college and start his career but he never forgot his first love.  Now fate has stepped in to bring these first loves back together again.

Overall, I liked the story.  The characters are sweet and very easy to like.  You’re immediately drawn into the story, waiting for the happy ending you know you’re going to get.

May 2016 Four Weddings and a Fiasco Kindle World Novellas:
(Clicking on the book covers will take you to Amazon for purchase.)