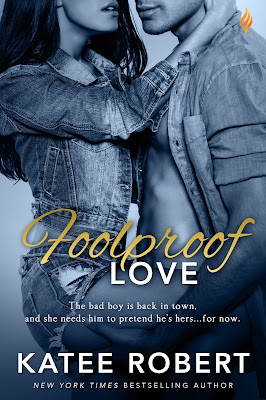 Bull rider Adam Meyer put Devil’s Falls in his rearview mirror years ago and hasn’t stopped running since. Now he’s back—temporarily, if he has any say about it. Restless, he finds himself kissing the sexiest girl in town…and agreeing to be the fake boyfriend in her little revenge scheme.

Jules Rodrigez isn’t interested in the role of town spinster. Being seen with a hell raiser like Adam is the perfect way to scandalize the residents, make her ex jealous, and prove she’s a sexy, desirable woman. And if their plan includes ridiculously hot sex—in public, of course—all the better.

But this thing between them has an expiration date. Putting down roots isn’t in Adam’s blood, and Jules’s roots in Devil’s Falls are bedrock deep. He’ll leave, even if it rips out his heart. But this time, he’s not sure he’ll survive it…

“That’s really sweet, Grant. It was great seeing you, but my boyfriend is waiting for me.”

“Oh, yeah, it’s a new thing. We haven’t exactly gone public with it—you know how Devil’s Falls can be—so you wouldn’t have heard.” She gave him a pat on his arm. “It was nice seeing you. So great. Really, we’ll have to catch up sometime soon.” And then she stepped around him, dragging Aubry behind her.

“What are you doing?” Aubry whispered.

“Winging it.” She stopped by the trio of men, all too aware of Grant watching her. “Hi, Daniel. Quinn. Adam.” They raised their beers.

Daniel looked over her shoulder with a frown. “Is that your piece-of-shit ex-boyfriend I see?”

“The very one.” She disentangled her arm from Aubry’s. “Speaking of, I need a favor.”

“Anything for you, kid.”

She tried not to roll her eyes at him calling her kid. He was a whole seven years older than her. Not exactly ancient. “Actually, it’s not you I need the favor from.” Before she could talk herself out of it, she sidled up to Adam and put her arms around his neck. To his credit, he didn’t shove her on her butt in the dirt, merely raising his eyebrows. Jules kept her voice low so there was no chance of Grant overhearing. “So as you’ve noticed, my ex is watching me really closely right now, and I might have told him a tiny white lie about me dating someone in order to avoid a devastating dose of humiliation. And since I can’t date Daniel and no one would ever believe I’d date Quinn—”

The man in question frowned. “You really know how to hit a man where it hurts, Jules.”

There wasn’t a whole lot to work with in those words, but he also had let his free hand drift down to settle on her hip, so she just kept talking. “If you could just play along and maybe kiss me like you want to do filthy things to me in the bed of your truck, I’d really appreciate it.”

If anything, his eyebrows rose higher. “That guy really got under your skin, didn’t he?”

“You have no idea.” Next to them, Daniel made a sound suspiciously like a growl, but neither of them looked over. Adam’s hand pulsed on her hip, the heat of it shocking despite the warmth of the night. His calluses dragged over the sensitive skin bared by her T-shirt, and she shivered. Maybe this was a terrible idea. She didn’t have time to really reconsider, though, because he set down his beer, cupped the back of her neck, and dealt her the single most devastating kiss of her life.

He took possession of her mouth, his tongue tracing the seam of her lips and then delving inside. He tasted of beer and something darker, something that hinted at exactly what she’d asked for—like he wanted to do filthy things to her in the bed of his truck. She closed her eyes, giving his tongue a tentative stroke, and had to fight down a moan at the way the move made her entire body go tight. More.

He lifted his head, breaking the kiss and slamming her back into the real world. She blinked up at him, all too aware of her body pressed against the entirety of his, of how he was hard in all the places she was soft, of how goddamn good he smelled. “Wow.”

There went that eyebrow again. “You think it was believable?”

Katee Robert’s Foolproof Love series is off to a really good start with it’s namesake, Foolproof Love.  This is the story of Jules Rodrigez and Adam Meyer.  Unlike most people who grow up in a small town and can’t wait to graduate high school and leave, Jules has always wanted to stay and raise her own family in the small West Texas town of Devil's Fall.  Her wanting to stay was one of the reasons her high school sweetheart, Grant, dumped her before leaving for Duke University.  For years, Jules had to endure the pitying looks from town people.  Now, Grant is back and looking to pick up where they left off.  Jules has been there, done that, and has the healed broken heart to show for for it.  She isn’t interested in Grant at all.  But with everyone looking and waiting to see the town’s “golden couple” get back together, Jules has to figure out a way to squish any and all inquires.

Adam is the best friend of Jules’s cousin.  Unlike Jules, he couldn’t wait to leave Devil’s Fall in the dust.  But he’s back to check in and look after his sick mama for a couple of weeks, until the open road calls to him again.  When Jules surprises him with a kiss and asks him to be her pretend boyfriend, he sees it as just the distraction he needs from his worries.  Neither expects this pretend relationship to suddenly feel so real, with true feelings and emotions.

Katee has written a wonderful romance with main and secondary characters you just gotta love.  Jules and Adam understand and need each other in more ways than they can ever imagine.  Their relationship is sweet and sexy.  I’m looking forward to the other two books featuring Adam’s two best friends.  They promise to be hilarious and just as hot as West Texas in the summertime.

Aubry Kaiser doesn’t like people—actually, that’s not right. She loathes people. Combine that with her crippling anxiety around crowds and she’s in a mess when she gets an exclusive invitation to play a demo of her favorite video game, Deathmatch…which will be held at a convention with five thousand other people. The only solution? Bring someone else with her to the con to act as a shield—and unfortunately the only person available is the one man she can’t stand. Quinn.

Quinn Baldwyn is in a mess of his own. He’s been dodging his family’s matchmaking attempts for years, but with his sister’s wedding on the horizon, he’s in need of a shield of his own. Who better to drive off any potential marriage-seeking women than the fire-breathing dragon known as Aubry?

Things start to go sideways almost immediately when Quinn’s truck breaks down, forcing them to spend a seriously hot night in a B&B. They might barely be able to hold down a civil conversation, but in bed those fireworks are only the good kind. The closer they get to Napa Valley and Quinn’s sister’s wedding, the more he realizes that he might actually…like Aubry. But can two polar opposite people from completely different worlds ever really connect outside of mind-blowing orgasms?

Add to your TBR:  Goodreads