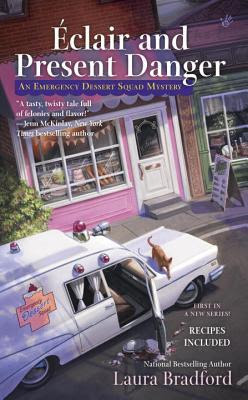 With her rent rising faster than her pie crust, bakery owner Winnie Johnson had hoped to be rescued by an inheritance from her wealthy friend and neighbor Gertrude Redenbacher. Instead all she inherits is the widow’s hostile hissing tabby, Lovey, and a vintage ambulance, restored by Gertrude’s late husband. As her dream crumbles, Winnie makes her final delivery—a peach pie to an elderly widower. But she finds Bart Wagner lying on his kitchen floor, smothered by a pillow.

To comfort her frightened and grieving neighbors, Winnie comes to the rescue with her baked goods—and an idea is born: dessert delivery via her ambulance and a new business called the Emergency Dessert Squad. When she’s not speeding to the scenes of dessert emergencies, Winnie is also racing to track down Bart’s killer—before she needs to call a real ambulance for the next victim...

Winnie Johnson is a 34-year-old single bakery owner, who lives in Silver Lake, Ohio and has an affinity for spending time with elderly people.  In fact, Winnie feels more comfortable with the over seventy crowd than people her own age.  She even lives among them on Serenity Lane.  Éclair and Present Danger starts out with Winnie, much to her shock, inheriting a cat named Lovey who hates her and a vintage ambulance from her friend Gertie, who recently passed away.  Without the cash inheritance that she was hoping for, Winnie is forced to close her bakery, Delectable Delights, as she can no longer afford to pay the increasingly high rent.

The mystery starts when Winnie, in the midst of making her weekly peach pie delivery to her neighbor across the street, discovers his dead body.  Bart Wagner was a nice old man who recently has been a little crabby and lonely since the death of his wife, Ethel six weeks ago.  With Bart’s murder, Winnie and her neighbors Bridget and Mr. Nelson are concerned with someone targeting the elderly.  Who could have killed Bart and why?

Éclair and Present Danger was hilarious from beginning to end, yes even with a dead body.  Winnie is a great character, with wonderful friends who cheer her up, make her laugh, support her unconditionally, and even help come up with the idea for her new emergency dessert delivery service and dessert ideas.  There isn’t a lot of typical investigation work, okay pretty much none at all.  You can forget about the police.  Seriously, were they even investigating?  When it comes to justice for Bart, rest assured Winnie Johnson and the her friends are on the case.  “Walkers, canes--either way they get the job done.”  I can NOT wait for the next book in this series.

Psst....Not only does Éclair and Present Danger give you a great mystery to solve with fantastic characters, there’s also dessert recipes!

**Received a copy from Berkley Prime Crime in exchange for an honest unbiased opinion.**