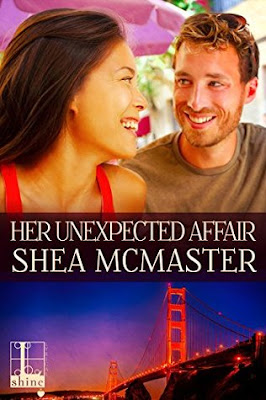 Her Unexpected Affair (The Robinsons, #2)

For as long as she can remember, Meilin Wu has had her life mapped out, and she's well down her chosen path--which had no warning signs about a tall, golden Brit who would bowl her over the night before her arranged marriage . . .

Drew Robinson has nearly finished his formal education and is ready to face the world when he meets Meilin, an exquisite beauty with Chinese ancestry. He doesn't mind she's ten years older, and the fact she knows Mandarin only makes her that much more a perfect fit for his upcoming adventures in China. He just has to get her to dump her fiancé and convince her that a trip in China will only enhance her established design business.

Easy for a guy who's known for seeing sunshine wherever he goes. Right?

A stab of jealousy knifed Meilin in the heart. Other people found grand passion, and here she was about to commit the rest of her days to a union with a man who failed to inspire the rush of heat she’d experienced by just shaking Drew’s hand. Insane. She didn’t know these people well enough to envy them so fiercely. And yet, that emotion was a thousand times stronger than any emotion she’d ever felt for Shan.

And when confused, she turned to small talk. “I detect more than a little pluminess in your accent, sir, but none in your sister’s. I’m guessing you were raised in England? Father and mother both British?”

“Good ear, not that it’s hard to decipher. I did the whole boarding school with proper elocution thing while Courtney was raised here in California as wild and free as a bird.”

“How very interesting. Are you to the manor born?” She did her best to say it in a British accent. Not that she’d had much practice, but who didn’t love a good BBC program from time to time?

Drew laughed. “No fancy titles in our branch, but we do have the biggest house in the district. My father likes to pretend he’s a lord of some sort at Christmas.”

The notion wasn’t foreign to Meilin.

Junlei arrived with the second round of drinks for her table and turned to Jack’s party to take their orders.

Her own father, directly descended from minor nobility turned laborer in California, liked to do the same. The reminders of how the family had started high born, fell to the lowest depths of society, then rose to the upper ranks were drummed into them all, chapter and verse at each large gathering. Come to think of it, at almost any gathering, large or small. The ancestors were well revered.

“Tell me about yourself,” Drew said. “Jack has told us nothing about you.”

Before she could open her mouth to politely turn the conversation again, Jack leaned across the table in order to be heard. “She’s an interior designer. One of the best in the city. Possibly in all California if not the west coast. Big time bigwig woman.”

Frowning at Jack did no good. She always let her work do her bragging for her, never did she need to toot her own horn. The wave of girls, fluttering like butterflies, returned to their table, relieving her from answering.

“Jack, what a surprise.”

“Jack, you mangy dog, what are you doing here? Spying on Meilin’s last night out? We should kick you out of here.”

“Not while he has friends here.” Sunchu, one of her few remaining single friends, leaned over from the far side of the table to extend her hand to Drew. “And who might you be, tall, golden, and handsome?” Drew stood and exchanged handshakes all around as the entire group of five women settled at the table. Sure, they included Courtney, but Drew had ninety-nine percent of their attention. And why not? Exactly as Sunchu had said, he was tall, golden, and very handsome. Not only did he have a perfect tan, but he smelled good too. Not one whiff of heavily scented aftershave teased Meilin’s nose. He was as fresh as a forest. Clean water and towering pines came to mind. Maybe a hint of citrus, possibly lime, but his scent was light and refreshing. She’d have to find out what he used.

What in the hell was she doing sniffing him up like that? No, she would not ask him what scent he wore. Especially because his proximity made her pulse thrum wildly in her veins. His thigh brushed against hers and she swallowed a gasp, as the contact acted like a raindrop landing on a smooth lake, sending ripples of goosebumps down her leg and up her body.

It took only a second to drain her first drink, set it down, and reach for the second. This was all she needed. A short, intense attraction to a foreigner on the eve of her engagement. Sort of like a very short-term foreign exchange. Surprised at her comparison to a semester abroad, she laughed to herself.

Not happening. Not now, not ever.

And then he had to ask, “Would you like to dance?”

The Robinsons Series:
(Clicking on the book covers will take you to Amazon.)

New Lyrical Press Contemporary Romance releases for June 21, 2016 (All 4 books are being given away, as part of the giveaway below.):
(Clicking on the book covers will take you to Amazon.)

Shea McMaster lives for traditional romance. Born in New Orleans, raised in California, Shea got moved to Alaska in 1977, where she attended high school before running back to California to get her English degree from Mills College. Alas, once back home she met and fell in love with her own forever true hero, a born and raised Alaska man. Since then she’s had a love-hate relationship with America’s largest state.
With her one and only son half way through college, and mostly out of the house, Shea is fortunate to spend her days engaged in daydreaming and turning those dreams into romantic novels and novellas featuring damsels in distress rescued by their own brains and hunky heroes. She also writes under the steamy romances under the name Morgan O’Reilly.