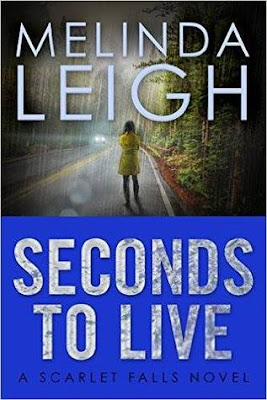 Wildlife biologist Mac Barrett avoided his hometown of Scarlet Falls for years—too many bad memories. But when he receives the news that his father is dying, he rushes home only to discover he’s too late. Shaken, Mac retreats to his remote cabin seeking peace and solace. Instead, he crashes his jeep to narrowly avoid running over the naked body of a woman lying in the road. Even more disturbing, when he regains consciousness, the body is gone.

Police detective Stella Dane wants to believe Mac, even if his story about the vanishing body seems far-fetched. But when Mac’s description matches the missing woman she’s been searching for, it raises a disturbing question: How does a dead body disappear?

Mac and Stella will have to work together to find the answer and catch a psychotic kidnapper—and quickly. The killer has a deadly message to send, and the case is about to become personal…

REVIEW
Seconds to Live is the third book in the Scarlet Falls series. The series itself focuses on the lives of the three adult Barrett military siblings after the demise of their brother. Each book was about one of the siblings and each has been a continuation so I would recommend reading them in succession. The siblings are a tough bunch because they were raised by a military father that they aptly called “The Colonel”. He taught them all how to survive in the worst way possible. They did hardcore military training like soldiers. The Colonel left them out in the woods to find their way on their own, he made them do aquatic rescue drills, and he even taught them hand to hand combat as well as weapons training. By the time they were adults, they could have been their own platoon. It’s no wonder that one of them became an actual soldier. Each of the boys was named after a Civil War figure.

Seconds to Live focuses on the youngest brother, Maclellan “Mac” Barrett who is a wildlife biologist. Over the past few years, Mac has struggled with trying to find his way back to his family because he has become accustomed to living in isolation as he studied wildlife around the world. As the family’s lives has been put in danger throughout the prior books, Mac has made everyone believe that he is somewhat of a scatterbrain and unreliable. He has also developed a crush on a local detective named Stella Dane. After the death of his father brings Mac into town, he finds himself helping Stella look for a murderer who may be a serial killer. Of course, sparks fly between them and Stella soon learns that Mac is much more than a wildlife biologist. As the body count increases, Mac and Stella have to band together to protect themselves and their families. Just like the previous books, the action is rather intense and the suspense is well drawn out. All of the characters are intriguing and flawed due to ghosts in their pasts that haunt them. The killer is also a piece of work who easily falls below their radar.

Melinda Leigh has created an interesting suspense that keeps you guessing until the very end. I like that Mac and Stella were very honest with each other so there was none of the typical secrets to make it difficult for them to be together. They threw caution to the wind and trusted each other from the beginning. That trust made it more believable that they were able to band together and focus on the real threat. I look forward to reading other books from this author although this may be the last one in this series.

The Scarlet Falls Series:
(Click on the book covers for more information or to purchase from Amazon.)