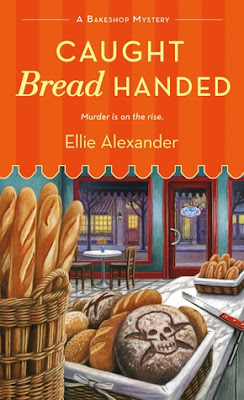 Welcome to Torte—a friendly, small-town family bake shop where the oven is heating up as high as the body count…
Jules Capshaw is still chewing over her husband Carlos’s return to Ashland, Oregon. Could there be too many cooks in the kitchen? Whatever is stirring between those two will have to wait. Despite the Oregon Shakespeare Festival being dark for the winter, the bakeshop is bustling, the dough is rolling, and there’s no rest for the weary…especially when murder is thrown into the mix.
When Mindy Nolan, the owner of a new restaurant in town, turns up dead, the batter at hand thickens. Jules knows that there was bad blood between Mindy and others in town, and tracking down the killer could prove to be an unwelcome treat. And to top it all off, there’s Carlos, who is pleading—with those delicious dark eyes and sexy Spanish accent—for Jules to take him back. Is home where the heart is or will she make a fresh start…and risk getting burned?

Caught Bread Handed, the fourth book in Ellie Alexander’s Bakeshop Mystery Series picks up about a week or two after On Thin Icing.  However, this is a complete standalone read, with barely anything mentioned about what happened in the previous books.

Caught Bread Handed finds many residents of Ashland, Oregon upset with a new restaurant in town.  Known for its love of Shakespeare, the downtown area has many small, family-owned shops and restaurants which boast Elizabethan touches.  Mindy Nolan has chosen to go against what’s usually found downtown and bring in a chain restaurant that is neon bright and doesn’t fit in.  Clashes between Mindy and various residents ensue.  While making her morning deliveries, Jules finds an unconscious Mindy.  When police arrive, surprises are revealed.

One of the reasons I like this series so much is because Ellie not only incorporates a mystery, but she gives readers a true romantic angle.  Jules Capshaw is in the midst of trying to figure out what’s good for her career and her personal life.  She’s still trying to come to terms with a secret revealed by her husband in a previous book and figure out where her marriage stands.

The mystery is solid in that you find yourself trying to figure out what’s going on along with Jules.  I’ll admit to really liking the way it played out.  I think the romantic conundrum Jules finds herself in took up most of the book and didn’t truly allow for a lot of mystery solving on her part.  Without a doubt I’m looking forward to reading more books in this series.  Ellie continues to write characters both main and secondary that you want to know. The small town setting of Ashland, Oregon is perfect and the recipes and food descriptions found in the book are incredible.