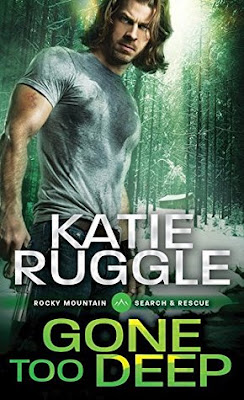 George Holloway has spent his life alone, exploring the treacherous beauty of the Colorado Rockies. He's the best survival expert Search and Rescue has, which makes him the obvious choice to lead Ellie Price through deadly terrain to find her missing father. There's just one problem-Ellie's everything George isn't. She's a city girl, charming, gregarious, delicate, small. And when she looks up at him with those big, dark eyes, he swears he would tear the world apart to keep her safe.

With a killer on the loose, he may have no choice.

Ellie's determined to find her father no matter the cost. But as she and her gorgeous mountain of a guide fight their way through an unforgiving wilderness, they find themselves in the crosshairs of a dangerous man in search of revenge. And they are now his prey...
REVIEW

Gone Too Deep is the third full book in Katie Ruggle’s Fire and Rescue series that focuses on members of the Fire and Rescue team in a small town named Simpson in Colorado. This story focuses on the largest and quietest team member named George Holloway and the petite Eleanor “Ellie” Price as they start an unlikely relationship while trying to find Ellie’s mentally ill father in the snow covered mountains.

Having read all of the books in this series, including the introductory novella, I can honestly say that Katie introduces you to a quirky character in every book. This time, it’s George. He is described as a mountain of man. He also doesn’t do well in the communication department. When he agrees to be Ellie’s guide to the mountains, the locals can’t believe it. George rarely does more than grunt and shake his head. The crazy thing is that he is also a handsome man that many local women have tried to attract but he hasn’t paid any woman any attention until he meets Ellie. She brings him out of his shell and shows him what it’s like to be adored and loved. She also deflowers him. For Ellie, George shows her what it’s like to be treated with respect. He becomes her protector and does what he can to keep her out of harm’s way. That harm comes in the form of two drug dealing brothers that are following them to get to Ellie’s father Baxter. Note that Baxter has information regarding a murder that is mentioned in the first book and is referenced throughout the series.

It was fun to watch Ellie and George interact. It was the clash of the city girl and the lumberjack. Despite the serious nature of their journey, they fall in love and evolve while doing so. The local townspeople continue to add their own comic relief while the mystery behind Baxter’s disappearance casts a shadow on some unlikely villains. I hope that the next book in the series wraps things up in a nice bow.

**Received a copy from the publisher in exchange for an honest unbiased review.**